New fines for illegal parking on footpaths, bus lanes and cycle lanes to be introduced 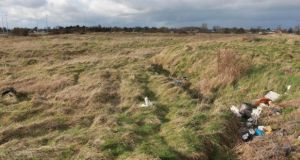 Councillors on Monday night approved a plan for one of the largest council owned sites in the city which would see 80 per cent of the land used for social and cost rental housing, with 20 per cent reserved for an affordable purchase scheme.

Previous plans for 853 homes at the 17-acre site collapsed last November following the refusal of councillors to approve a deal with developer Glenveagh Homes.

The deal would have meant 50 per cent of the homes sold privately by Glenveagh, 30 per cent bought by the council for social housing and 20 per cent sold to low- and middle-income workers qualifying for the upcoming affordable purchase scheme.

The councillors’ new plan would mean the number of social homes on the site increase to 40 per cent, another 40 per cent would be used for an affordable or cost-rental scheme - where rent is linked to the cost of financing, building and managing the property. The remaining 20 per cent would still be available for affordable sales, but purchasers would have to offer the property back to the council if they were to move. No private sales would be included in the councillors’ plan.

Mr Keegan on Monday night told councillors said he was concerned about the councillors’ new plan, and their decision to scrap the previous agreement which had been approved by councillors in January 2017 following negotiations with the Minister for Housing.

“The management view is we have serious reservations, particular about the decision to have no private housing,” Mr Keegan said.

“We are walking away from an agreement that we made, that the executive spent four years bringing almost to successful conclusion, now we are reneging on that agreement we reached. I think that will have long term adverse implications for the city council.”

Meanwhile new fines for illegal parking on footpaths, bus lanes and cycle lanes have been approved by councillors.

The on-the-spot fines will be just €40, half the current Dublin city clamping charge. However, the council’s traffic department said, the fines will “complement” rather than replace clamping in the city.

The fines would be issued for the specific offences of blocking clearways, cycle tracks and bus lanes; footpath parking; non-commercial parking in loading bays; and illegal coach parking. The system would be introduced on a 12 month trial basis later this year.