People reach out to ‘Boxer’ Moran after TV interview on suicide

‘People have put a lot of faith in me’: Minister plans event on literacy and mental health 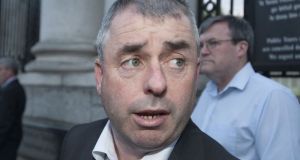 Minister for State at the Office of Public Works Kevin “Boxer” Moran has described how he received calls and visits from people all over the country following his Late, Late Show appearance in which he talked about an attempt to take his own life and his literacy difficulties.

He said he now has to devote almost a day a week to dealing with correspondence from people suffering with mental health issues.

He is planning an event in December at which people with literacy difficulties and mental health problems can meet Ministers.

In the television interview last May, the Independent Alliance TD for Longford-Westmeath told how he had been ashamed of undiagnosed dyslexia and left school at 13. In later life, he had panic attacks.

One Sunday afternoon after clay-pigeon shooting with friends, he said he drove to a field near his home and pointed a loaded shotgun at his head. He pulled the trigger but blacked out. Somehow he moved the gun and woke to find he had shot through the car roof.

“A great number of people have come to me since the Late Late Show. People have put a lot of faith in me and have come to my office at the weekends to talk about suicide.”

Last weekend, he said, a group of 16 travelled from Donegal, among them a 17-year old girl with her mother. The girl had attempted to take her life some months ago.

“I am talking now about running a two-day seminar at the end of the year in Athlone. I want Ministers to come and hear how people are suffering and what they need. It’s not a question of shouting and roaring ,” he said.