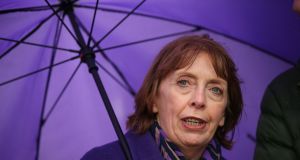 Social democrats co-leader Róisín Shortall said it was an indictment of Ireland that 100,000 children live in poverty. Photograph: Nick Bradshaw

The Social Democrats have pledged to eliminate child poverty in its entirely over the course of a government term.

Party co-leader Róisín Shortall said it was an indictment of Ireland that 100,000 children live in poverty and there needed to be a specific deadline to end child poverty in the early part of the decade.

She warned that “we are storing up massive problems for the future”, unless the issue was addressed as children go without adequate heat, nutrition, clothing and face serious social exclusion as a result. It required an interconnected all of government response led by the taoiseach, she said.

The Dublin North West TD was speaking as the party launched its policy on children, families and work/life balance which include “vastly improving entitlement to parental leave and flexible work options”, an early years payment for children and improved support under the National Childcare Scheme.

The party successfully introduced legislation in the last Dáil which was supported by the Government to extend unpaid parental leave to six months and raise the qualifying age for a child from eight to 12 years. The party would like this to rise to 16 years.

It calls for the overall amount of paid and unpaid leave to be extended to the European average of 100 weeks per child.

The party said it would establish a commission to research, trial and set out a pathway to the introduction of a four-day week.

It would introduce a new early years payment to cover children from the end of paid parental leave until entry into pre-school and through the National Childcare Scheme improve supports to allow more families to qualify for the scheme.

Child poverty is not just about income, Ms Shortall said, but about access to public services. and the lack of access is “the real killer for an awful lot of poor families. There’s no way to lift themselves out of the circumstances they’ve been born into.”

She said the public contract should be about people paying taxes according to their means and then everyone can depend on health services.

Eliminating such poverty could be done through a number of measures including providing completely free primary school education, which would cost €100 million.

The party’s proposals are costed as part of the cross-party Slaintecare programme at an estimated €400 million.

Wicklow candidate Cllr Jennifer Whitmore said there was a huge public demand to extend both paid and unpaid parental leave with their children. Ireland lags far behind other EU countries on this issue, she said.

A society that offered a proper balance between work and life outside work is one with a “healthier and happier population”.

Dublin West candidate Aengus O Maoláin said there had to be proper investment in schools because parents are “sick and tired of forking out for a public service that is supposed to be free”.