Addiction specialist warns parents on impact of their drinking on family 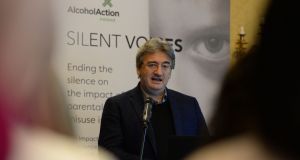 BBC journalist Fergal Keane spoke of the devastating impact his father’s alcoholism had on him as a child, and into adulthood. Photograph: Alan Betson / The Irish Times 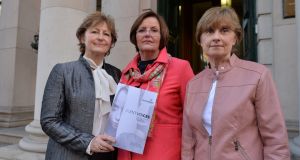 Parents who regularly drink three or more drinks a day could be “unwittingly” abusing their children, a HSE addiction specialist has warned.

Marion Rackard, who experienced parental alcohol abuse as a child, was speaking at the announcement of an initiative to raise awareness of the impact of parent’s alcohol abuse on children.

The “Silent Voices” campaign, an initiative of Alcohol Action Ireland, will gather the experiences of adults who grew up with parental alcohol abuse as part of a drive to ensure services, including schools, Tusla and the HSE, respond appropriately to the damage that can be done.

Ms Rackard said children, even infants, could sense when a parent or care-giver was not attuned to their needs, whether as a result of alcohol consumption or other reasons. This could frighten a child and was a form of abuse.

“If a parent is aware that after three glasses [of wine] they are becoming less available to their children, less emotionally present . . . that is doing damage. Attunement [to a child’s emotions] is the issue, the quality of the relationship.”

She said a child’s greatest needs, as well as food and shelter, were to “feel safe . . . welcome, to feel special” to their parents. They needed to “belong to a family and to know they were worthy of kindness and attention,” she said.

Alcohol abuse in the family, she said, was “one of the last [societal] skeletons

“We’ve had the sexual abuse, the institutional abuse. This is abuse within the family . . . unwittingly and unknowingly it’s abuse, it’s neglect.”

Dr Sharon Lambert, of the department of psychology at University College Cork, said studies had found 14 per cent of Irish children felt afraid or unsafe because of their parents’ drinking; 14 per cent had witnessed conflict or violence between parents and 11 per cent had had to take responsibility for a sibling because of a parent’s drinking.

“There is no question that the roots of adult mental health are related to traumatic experiences, mostly in childhood.”

Joanne Irwin, assistant general secretary of the Teachers Union of Ireland, called for training for teachers to recognise and respond to the impact of parents’ drinking, on children in their classes.

BBC journalist and broadcaster Fergal Keane spoke of the devastating impact his father’s alcoholism had on him as a child, and into adulthood. He stressed the loneliness, the sense of being an outsider, the shame he felt as a child.

“I still struggle with the feeling I will never be enough, never be good enough . . . I constantly watch other people’s reactions in emotional situations. How are they? Do I need to run in and rescue? The people pleasing . . . It all comes back to self-esteem being shot.

“Insecurity is your birthright if you grow up in a home like this. And the grief. I am over the shame but I am no way over the grief and I wonder will I ever be, looking back at what was lost and knowing that can’t recovered.

“I am lucky there is acceptance, of myself and the distortions that background produced in me. There’s coming to terms on a daily basis, and accepting that some days I will feel dreadful and I won’t know why. And I’ll be ambushed by pain that I can’t explain.”

He quoted from a poem by Raymond Carver, whose work he said had “saved [his] sanity” at times. Carver was a recovering alcoholic, who wrote Late Fragment when dying of lung cancer.

“And did you get what/ you wanted from this life / even so?/ I did/ And what did you want?/ To call myself beloved/to feel myself beloved on the earth.”