Locals assemble as they battle to save Gurteen post office 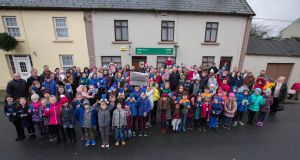 Villagers in Gurteen, Co Sligo, who have launched a “military-style” operation in a bid to save their post office, say 30 jobs will be lost if the outlet closes on January 31st.

In a bid to convince An Post that their post office is viable, a local action group has conducted a census in the village showing it has a population of 512 – considerably more than the 2016 census figure of 393.

“We went door to door and did a like-for-like survey, using a map to cover the same area as the census,” explained Nigel Clancy of the Gurteen Post Office Action Group.

An Post has said that a 500-strong population is needed for a post office to be viable.

Gurteen post office had been due to close at the end of October last but got a three-month reprieve. Mr Clancy pointed out that since then 90 new post office accounts have been opened, with an estimated 75 per cent of these for local children.

More than 100 people, including parents and children from the local Busy Bees Day Care Centre, gathered at the post office on Sunday morning, with many of the children carrying their post office savings books.

“This is a vibrant village. We have gone from a three-teacher to a five-teacher school over the past three years and now have 116 pupils,” Mr Clancy said.

The action group insists that Gurteen is more viable than many of the other recently closed rural post offices because so many people have moved to the village in recent years as it becomes a “commuter town to Sligo”.

“There is not one house available for rent in Gurteen at the moment,” said Mr Clancy.

An Post said that “as of right now” Gurteen post office is scheduled to close on January 31st. “We have a decision to make in the next few days,” added a spokesman, who said an announcement would be made this week.

Tom McGettrick, chairman of the action group, said there were 27 businesses employing more than 170 people between the village signposts.

“On Thursdays and Fridays when people get their payments they go for coffee or breakfast, and they do their shopping. We have a few hairdressers in the village, we have a pharmacy and our hotel recently re-opened.

“One lady told me recently that after drawing her pension she got her hair done, she did her shopping, she went to the pharmacy and to the creamery store and after all that she had €25 of her pension left.”