An investigation is underway after a homeless man was left in a serious condition when a utility vehicle removed his tent while he was sleeping it during a "tidy up" of the Grand Canal walkway at Wilton Terrace, Dublin 2. Video: Collins 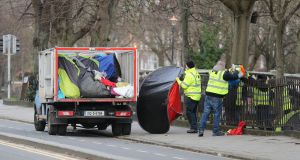 Dublin City Council has said seven “empty tents” were removed from the banks of the Grand Canal on Friday as all occupants had recently moved to temporary or permanent accommodation.

The tents, which were located at Warrington Place, were empty for “some days and were unoccupied at the time of removal”, it said.

“Six of the occupants of these tents have recently moved to temporary accommodation with another occupant moving to a permanent social housing tenancy,” said a council spokesman. “The people involved are now accessing health and addiction supports, as appropriate.”

Dublin Region Homeless Executive (DRHE) is provided by Dublin City Council as the lead statutory authority in response to homelessness in the capital, and co-ordinates and delivers homeless services across the local authorities.

“As the DRHE funded outreach team worked with these individuals, the DRHE were fully aware that these tents had been empty for some days and were unoccupied at the time of removal,” added the council.

The council said that if any personal belongings are found in the tents,  they are stored by Dublin Simon Outreach and any waste materials are disposed of.

Independent Cllr Anthony Flynn, who is the chief executive of Inner City Helping Homeless, said tents were also removed from the Henry Street area over the last two weeks by the council and gardaí.

“There seems to be ongoing operations put in place now over the last two weeks by Dublin Regional Homeless Executive, An Garda Síochána and waste management to remove tents on the onus that they’re offering those people beds,” said Cllr Flynn.

“The DRHE claimed that the individuals they engaged with [at Henry Street] had taken up accommodation that was offered to them. We subsequently found out that that wasn’t the case. Some refused accommodation citing concerns in terms of social distancing and the standards within some of those accommodation units,” he added.

Cllr Flynn said “displacing and dispersing” rough sleepers would not result in them engaging with homelessness services.

“My concern would be that there seems to be a show of force here in regard to, if someone is vulnerable living in a tent, and seeing the gardaí are assisting DRHE or waste management, they’re going to feel uncomfortable and obliged to move along.

“Numbers have dramatically reduced and you don’t hear me saying this often. We’re running an operation in conjunction with the DRHE to bring people in out of the cold weather and last night 54 people were on the streets. That’s the lowest number in a very long time, but we can’t be aggressive in terms of bringing these people in.”

A homeless man was seriously injured last year when the tent in which he was staying on the Grand Canal was lifted by an industrial vehicle during a clean-up.