Mourning our daughter as the country prepares to vote on abortion

We decided not to go to England, but it isn’t the right choice for everyone in that situation 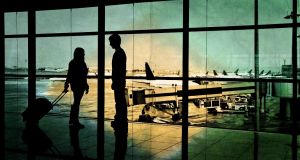 Walking around Dublin city at the moment involves negotiating an unsettling array of campaign posters: lampposts and billboards are covered in images of foetuses.

The posters have been put up ahead of the referendum on Friday on whether to repeal the Eighth Amendment, which has enshrined the right to life of the unborn in the Irish Constitution since its introduction in 1983.

These images are meant to provoke a strong response, of course, but the sight of so many foetuses on the streets is particularly distressing for us. A few months ago, our daughter, Cara, who suffered from a chromosomal abnormality, died at 20 weeks.

The initial diagnosis came after the 12-week scan. Our consultant could see something wrong on the grainy image, and a test soon confirmed our worst fears. Cara’s condition was, in that blunt medical phrase, “incompatible with life.”

In other countries, such a diagnosis would usually lead to a termination, hastening the inevitable end. But in Ireland, that’s prohibited by the Eighth Amendment. If we wanted to take that route, we would have to follow in the footsteps of the 170,000 or so women who have made this traumatic journey across the Irish Sea to England and Wales over the years. The reality is that with or without the Eighth Amendment, women in Ireland already have access to abortion, just not on our soil.

Heartbroken by our daughter’s diagnosis, we contacted a hospital in England and began making arrangements. We felt an acute anger that we had to plan a surreptitious trip, that we had to leave behind our caring doctors and midwives. The sense of enforced furtiveness was degrading, a result of the shame that surrounds the journey. When we were at our most vulnerable, having to make these plans was an added torture.

As the day of our departure approached, one of us, Aoife, suffered an intense panic. The prospect of the procedure was daunting enough; the prospect of checking onto a plane, booking accommodations, all of it, was just too much to bear. We didn’t make the journey. We couldn’t.

Instead, we gave Cara her name – in Irish, it means “friend” – and decided to embrace the time we had with her. For nearly two months, between getting the diagnosis and her death, we got to see our daughter grow in weekly ultrasound scans, we got to hear her heartbeat, we got to see her move. We made memories. We became a family.

And then, a scan just before Christmas showed there was no heartbeat, no movement. The sense of loss was overwhelming. That time together with Cara was precious, and the love we have for her and the grief we feel leaves us in no doubt – Cara was not born alive, she never got to take a breath of air, but she was most certainly a person in her own right.

Emphasising the personhood of the unborn is the point of all those posters and billboards showing pictures of foetuses. Whether you have been through an experience like ours or not, that’s a legitimate perspective.

But we have encountered a contradiction: our Constitution and traditional culture champion the right to life of the unborn, but we have found that actually mourning the unborn is still taboo. Talking to other parents in the same situation, we find again and again a sense that our grief is not recognised as valid.

People don’t want to accept a baby’s death or the attendant sadness; to have experienced both birth and death in the same moment feels like a transgression. Losing a child in pregnancy is a very lonely burden precisely because you are not supposed to talk about it. Not coincidentally, it is a silencing of a pain borne first and foremost by women.

This sad reality is in keeping with the traditional Roman Catholic culture that still permeates society. The same Catholic ideology that campaigns to protect the unborn didn’t believe that the unbaptised - never mind the unborn - were worthy of full burial rites (as grimly demonstrated by the story of Davin’s hometown, Tuam, where 796 children were buried unrecorded). To this day, it is a culture in which the lives of the unborn are sacred in some respects and largely disregarded in others.

This fundamental contradiction ultimately makes those posters and billboards so difficult to look at.

On a superficial level, they resemble those precious ultrasound scans of Cara, but it doesn’t feel as though she is being championed by this campaign. Instead, we can’t escape the feeling that Cara and all those lives represented by the posters are being exploited. Far from coming from a place of love and compassion, the images are being used to provoke shock and, sometimes, disgust.

We decided not to go to England, and it was the right choice for us. We are grateful for the time we had with Cara, and we are proud to be her parents. But it isn’t the right choice for everyone in that situation - other parents, acting out of a sincere love and concern for their child, might make a very different decision.

Our heartbreaking experience taught us that such a decision should never be shrouded in shame and stigma. This referendum is a chance for everyone in Ireland to leave such shame and stigma behind. We have, instead, the opportunity to replace them with trust and real empathy.

Aoife Walsh and Davin O’Dwyer are editors and writers