Classical Studies paper reasonable for the most part, and Latin paper mixed 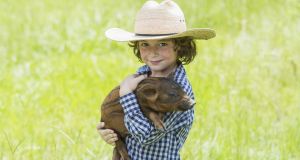 Amont the topics on the higher level paper were one about a young boy who wins a pig at a festival. Photograph: iStock

The Junior Cert German papers held no real surprises and followed the format of previous years, according to Fiona Healy, ASTI subject representative and a teacher at St Joseph’s Secondary School in Ballybunion, Kerry.

“Students at both levels said the papers were fine and they were able to attempt most of the questions,” she said. “An interesting feature of the paper included a number of English words in the reading comprehensions which have been borrowed and are now part of the German language. The nouns are given a capital letter and these words included Fanshops, Teenagers and Adrenaline.”

On the higher level paper, topics included pocket money, German teenagers and what they are fans of and a quirky story on a young boy who wins a pig at a local festival. “It was a nice text and not written in the past tense,” she said. “Topics on the letter included writing about your German teacher, going to the cinema and summer camps.”

Topics on the ordinary level paper included the chocolate museum in Cologne, pets, pocket money, Irish weather and watching TV. Ms Healy said a story about a dog who saves a baby in a pram that is about to roll on to the road was “quite challenging for ordinary level students.”

The Junior Cert classical studies paper took place in the afternoon. Jim O’Dea, classics teacher at Rathdown School in Glenageary, Co Dublin, said that the higher level paper was reasonable for the most part. “There were a number of questions which carried 20 or 24 marks. This kind of detail question should be avoided at this level and the pupils who attempted those questions were at a distinct disadvantage.” He added that students would have been happy with the ordinary level paper and that the problem of the questions requiring great detail did not arise.

A small number of students sat Junior Cert Latin. Mr O’Dea said that the questions on the set text were more than fair, although the first unseen passage was quite difficult.

TRY THIS AT HOME

Junior Cert Latin, higher level
Translate into Latin:
Vercingetorix was a very brave leader who advanced against the Romans. — Julius Caesar led his soldiers so well that he soon defeated the Gauls.