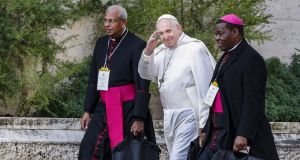 Pope Francis waves as he arrives for the second day of a global child protection summit on the sex abuse crisis within the Catholic Church. Photograph: Giuseppe Lami/AFP/Getty Images

A leading US cardinal has called for new independent ways of reporting bishops who cover up the abuse of children by priests or who may themselves be abusers.

Archbishop of Chicago, Cardinal Blase Cupich told senior church figures in Rome on Friday morning that “attention should be given to establishing independent reporting mechanisms in the form of a dedicated telephone line and/or web portal service to receive and transmit the allegations.”

Such allegations should go “directly to the Apostolic Nuncio, the Metropolitan of the accused bishop, or as needed his alternate and any lay experts provided for”. He said “the involvement of lay experts to assist from this point forward is for the good of the process and the value of transparency”.

All such “mechanisms for reporting allegations of abuse or mishandling of abuse cases against a bishop should be transparent and well known to the faithful”, he said.

Cardinal Cupich was addressing 190 Catholic church leaders at the four-day meeting on the protection of minors in the church at the Vatican specially convened by Pope Francis. Ireland is being represented by the president of the Irish Episcopal Conference, Archbishop Eamon Martin.

“Many of our people, not just those abused or parents of the abused, but the faithful at large are wondering if we the leaders of the church fully understand this reality, particularly when they see little care given to abused children, or even worse, when it is covered up to protect the abuser or the institution,” he said.

The church must “cast aside the institutional distance and relational blinders that insulate us from coming face to face with the raw destruction of the lives of children and vulnerable people that clergy sexual abuse brings,” he said

“Mothers and fathers have called us to account, for they simply cannot comprehend how we as bishops and religious superiors have often been blinded to the scope and damage of sexual abuse of minors,” he said.

Cardinal Oswald Gracias, archbishop of Bombay, told the meeting “the sexual abuse of minors and other vulnerable people not only breaks divine and ecclesiastical law, it is also public criminal behaviour.” Therefore the church should cooperate “with civil authorities in these matters to bring justice to survivors and to the civil order.”

The cardinal, who is president of the Conference of Catholic Bishops of India, as well as being a member of the Council of Cardinals which advises Pope Francis, also said that though “the experience of abuse seems dramatically present in certain parts of the world, it is not a limited phenomenon.”

The “entire church” must “act decisively to prevent abuse from occurring in the future and to do whatever possible to foster healing for victims,” he said.

At a press conference in the Vatican on Friday afternoon Cardinal Cupich noted how there remained parts of the world today “where human sexuality is not talked about.” It reminded him of what it was like when he was growing up in the US during the 1950s.

There remained cultures “where they do not have experience of talking about these very intimate issues in a public way. But that is not a justification for secrecy.” On the other hand, he said, “we have to ensure we don’t become imperialists here, from the US and the Western world.” But the basic principle remained “that there is no place in ministry for anyone who would harm a child,” he said.

“We cannot allow anyone in ministry to hurt the young,” said Archbishop Charles Scicluna at the same press conference. Adjunct secretary of the Vatican’s Congregation for the Doctrine of the Faith (CDF), which has responsibility for dealing with cases of clerical child sex abuse, he described this as “a fundamental principle” as articulated by Pope John Paul II on April 23rd 2002, “to protect the flock.”

Archbishop of Boston and president of the Vatican’s Commission for the Protection of Minors, Cardinal Sean O’Malley said at the same press conference there was “nothing more urgent for the church to do than to come up with ways to address the most important part of our mission at this point in our history, the protection of children.”

Also a member of the Council of Cardinals which advises Pope Francis, Cardinal O’Malley said “many bishops had not had the experience of meeting survivors, it is a life-changing experience.” He described as “a moral obligation for the safety of children “the reporting by bishops of abuse cases to civil authorities.

“Reporting for me is a big part of the way forward for the protection of children. The commitment by bishops conference to report is very, very important,” he said.

Archbishop Scicluna said that “as bishops we have decided that reporting is a priority.” Much can depend on the local culture, but the advice of the Congregation for the Doctrine of the Faith was to “abide by State law” in such matters, he said.