Vatican summit could be defining moment for Pope Francis 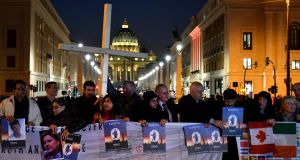 Members of Ending Clergy Abuse, a global organisation of prominent survivors and activists who are in Rome for this week’s papal summit on the sex abuse crisis within the Catholic Church, hold a protest by the Castel Sant’Angelo in Rome. Photograph: Alberto Pizzoli/AFP/Getty Images

Pope Francis convened a meeting of Roman Catholic leaders worldwide yesterday to grapple directly with clerical child sexual abuse, a scourge that has for decades devastated some corners of his vast church while being utterly ignored and denied in others.

The meeting was a potentially defining moment for Francis’s papacy and the most visible step by the Vatican to impress on bishops and other church leaders, some of them still sceptical, the enormity of a crisis that has shaken the faithful.

Expectations for action were amplified by victims and victim advocates, who converged in Rome to apply pressure from outside the Vatican walls on the meeting in a Holy See conference hall. Scandals have repeatedly emerged around the world decades after the problem first came to light in the US, where the systemic shuffling of predatory priests from parish to parish spread abuse like a virus.

A lack of forceful action by the Vatican has disheartened and disgusted many victims and their advocates, who are demanding a policy of zero tolerance with a dismissal from the clerical state for abusive priests and the bishops who protect them.

The issue has drastically devalued the moral authority that is the currency of the clergy and their pope, who is often a lonely voice in support of migrants and the poor. As the abuse crisis has festered, critics have asked why anyone should listen to a moral leader unable, or unwilling, to clean up his own house.

Yesterday, addressing the 190 leaders of the church who had assembled from around the world, Francis sought to reassure his flock that “we hear the cry of the little ones asking for justice”.

Still, despite his acknowledgment that people “expect from us not simple and obvious condemnations, but concrete and effective measures”, he offered remedies disappointing to many victims.

Instead, Francis – who intends the meeting to be a “catechesis”, educating bishops and religious leaders so they could undergo a conversion of spirit on the severity of the crisis – provided those assembled with 21 “reflection points”.

“They are a road map for our discussion,” Archbishop Charles Scicluna, the Vatican’s leading sex crimes investigator, said at a news conference. They included weighing whether priests and bishops found guilty of abuse should be dismissed from ministry, but fell short of what most advocates consider zero tolerance – the automatic dismissal from the clerical state. “You have to take it on a case-by-case basis,” Archbishop Scicluna said, promising no blanket remedies.

The meeting itself included the presidents of many of the world’s bishops’ conferences, men’s and women’s religious orders and powerful cardinals from his committee of top advisers.

Francis, who had initially inspired hopes for action after his election in 2013, placed himself in the ranks of abuse sceptics early last year, when he accused victims of slandering bishops during a trip to Chile. The outcry from victims was fast and furious. Criticism reached a fever pitch last summer, when the Pennsylvania attorney general released a scathing grand jury report and prelates in Francis’s own hierarchy also accused him of covering up for abusers.

Since last year, Francis has undergone something of a conversion on the issue, admitting errors, asking forgiveness and toughening his stance toward those who covered up the crimes. He has pushed out bishops in Chile and last week defrocked American former cardinal Theodore McCarrick.

Some bishops have long denied that clerical sex abuse was a problem, or suggested that it exists only in the Anglo-Saxon world, or is a result of homosexuality in the church, a contention discredited by most scientific studies. When bishops have acknowledged abuse, they often treated it as a sin to forgive rather than a crime to prosecute, reflexively protected their own and believed bishops over victims.

After the pope spoke, the Holy See said the assembled bishops watched video presentations of testimony from victims, who were not identified to the news media. It was an exercise in spreading the word that the abuses were real. – New York Times