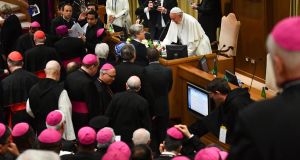 Catholic Church leaders from around the world have heard an African woman describe being abused from the age of 15 for 13 years by a priest, who she says forced her to have three abortions.

This was “quite simply because he did not want to use condoms or contraceptives”, she said. The priest would not allow her to have boyfriends and beat her if she refused him sex, she added.

“I feel I have a life destroyed,” said the woman, who was one of five clerical child sex abuse survivors from Latin America, Africa, eastern Europe, the US and Asia, who spoke via videolink at the four-day Meeting on the Protection of Minors in the Church.

The meeting, which began in Rome on Thursday, is being attended by 190 bishops and leaders of religious congregations. Catholic Ireland is being represented by Archbishop Eamon Martin, the president of the Irish Episcopal Conference.

Juan Carlos Cruz, an abuse survivor from Chile, told them when he went to church authorities “the first thing they did was treat me as a liar, turn their backs and tell me that I, and others, were enemies of the church”.

A survivor from eastern Europe recalled how despite efforts to reach his own bishop on the matter, eight years later his letter remains unanswered.

In a brief statement opening the meeting, Pope Francis spoke of “the scourge of sexual abuse perpetrated by ecclesiastics to the great harm of minors”. Abuse victims expected “concrete and efficient measures” to address the scandal and not mere condemnations, he said.

Among 21 reflections for discussion at the meeting, Francis has proposed to change Catholic law so that all under the age of 16 would be designated as children throughout the church worldwide.

Currently in canon law boys under 16 are so designated, but only girls under 14, in order to facilitate marriages in some cultures.

The pope has also proposed that the names of accused priests should not be published “before the preliminary investigation and the definitive condemnation”.

In a lengthy address to the meeting, Archbishop Charles Scicluna, adjunct secretary of the Vatican’s Congregation for the Doctrine of the Faith (CDF), which has responsibilty for dealing with cases of clerical child sex abuse, said the primary duty of bishops was “the care of our people”. It was “our sacred duty to protect our people and to ensure justice when they have been abused”, he said.

“[Bishops] should not underestimate the need to confront ourselves with the deep wounds inflicted on victims of sex abuse by members of the clergy.”

Archbishop Scicluna said the faith community “under our care should know that we mean business. They should come to know us as friends of their safety and that of their children and youth...We will protect them at all cost. We will lay down our lives for the flocks entrusted to us.”