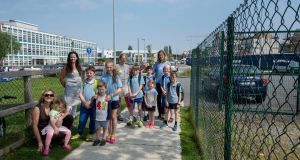 Concerned parents with their children at Our Lady’s Grove primary school in Goatstown, where the religious owners sold land to Durkan Homes for a reported €13 million. Photograph: Brenda Fitzsimons

The motions, calling on the council to rezone school lands currently zoned as “residential” to “open space and recreational”, come as the religious owners of two schools in the area sell lands for housing development.

In Deansgrange, the Christian Brothers are nearing the completion of the sale of 3 hectares (7.5 acres) of playing fields to the rear of Clonkeen College for a reported €18 million.

The school board was told about the sale on May 3rd, after contracts had been entered into between the Brothers and developer Durkan Homes and 12 months after negotiations on the sale began.

The news was greeted with shock and anger by parents and the board of management who are now calling on the Department of Education to take ownership of the school and for the patron, the Edmund Rice Schools Trust, to step aside.

In Goatstown, the Religious of Jesus and Mary last week sold 2.2 hectares (5.4 acres) adjoining Our Lady’s Grove primary and secondary schools, for a reported €13 million – also to Durkan Homes. The Sisters announced the sale the day after more than 120 parents and residents attended a meeting objecting to the sale.

Given that land in the area is among the most sought-after for housing in the State, concern is increasing that school patrons will be tempted to sell tracts of school land for housing.

Councillors Karen Furlong (Green Party), Shay Brennan (Fianna Fáil) and Sorcha Nic Cormaic (Sinn Féin) will call for a suspension of standing orders to move a motion calling for a reopening of the county development to rezone school lands from “objective A” (residential) to “objective F” (open space and recreational). John Bailey (Fine Gael) is moving a similar motion.