‘My mother had no choice. She had no option to parent me herself’ 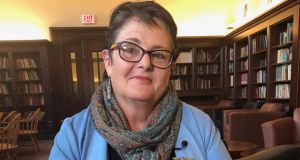 Mari Steed is one of thousands of people who were sent by institutions in Ireland to the US for adoption.

She was born in Bessborough Mother and Baby Home in Cork in 1960, one of three homes run by the Sisters of the Sacred Hearts of Jesus and Mary and moved across the Atalantic in December 1961, aged approximately 18 months.

She was raised in the Philadelphia area and, as per the adoption criteria set out by the Catholic Church in Ireland, she attended a Catholic school.

In her final year of high school, she became pregnant outside of wedlock and was sent to a Catholic institution in Philadelphia. She gave birth to a daughter in 1978, who was taken away from her after a few days.

In the early 1990s, Ms Steed began the search for her birth mother.

Like many mothers she ended up in Britain. She had married twice, and had built a new life there

“There was very little information available. This was the early days of the internet. I remember the first word I entered in a search engine was ‘adoption,’” she recalls.

She said she initially got some information from the order at Bessborough, but later found out what she had been told was incorrect.

Ms Steed says the institution told her it knew nothing about her birth mother’s whereabouts, but had in fact organised for her to take up a job in Wales. She eventually tracked her mother down in England.

“Like many mothers she ended up in Britain. She had married twice, and had built a new life there.”

Asked if she felt anger towards her mother, Ms Steed says not at all. “My mother had no choice. She had no option to parent me herself – that just didn’t exist in Ireland in 1960.”

Ms Steed soon learned that her birth mother had also been born out of wedlock herself and was raised in an industrial school in Waterford before being moved to Cork.

It turned out that we lived a mile apart, that she had gone to the same school as me

After she got a job in Our Lady’s Hospital in Dublin, she got pregnant and entered the Bessborough home.

“Her biggest fear was that if I remained in Ireland I would end up just like her. She begged the nuns to send me to the United States, to give me an opportunity for a better life.”

Ms Steed has also made contact with the daughter who was taken from her.

“When my daughter turned 18 I began looking for her. At the same time, her adoptive parents had been helping her to trace me. It turned out that we lived a mile apart, that she had gone to the same school as me.”

Ms Steed says she has a very good relationship with her daughter and is grandmother to five grandchildren.

Asked about the Government’s policy on historical abuse, she says she would like to see more emphasis on disclosure and access to documents. She was able to trace her Irish birth certificate through a Freedom of Information request in the US – an avenue not always open to survivors in Ireland.

“The primary thing that needs to happen is for the Government to release documents,” she says. “You have a right to know your identity. The UN guarantees us that right.”