Private developers should not be relied on for affordable housing, forum told 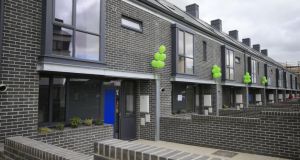 The Government does not need private developers to provide affordable homes, a conference on housing has heard.

Hugh Brennan, the chief executive of Ó Cualann Cohousing Alliance, said not-for-profit approved housing bodies had the capacity to provide affordable housing, for sale or rent, without the requirement for the State to subsidise housing in the private sector.

Ó Cualann, which organised the conference in Dublin on Thursday, is building a second estate in Ballymun with homes ranging in price from €145,000 to €220,000.

The housing co-op is the only organisation in the State currently providing houses under an affordable housing scheme.

The last national affordable housing scheme was discontinued in 2011. Minster for Eoghan Murphy early this year signed a new scheme into law, but houses are not yet under construction.

The co-op was able to keep the prices below market costs because it was sold the land in Ballymun by Dublin City Council for €1,000 per house plot. On the open market the same plots would have cost €20,000-€30,000. The council also waived the development levies of €86.40 per square metre.

About 60 per cent of those who have already bought Ó Cualann houses were paying an average of €1,400 a month in rent and are now paying mortgages at an average of €880. Mr Brennan said the Ó Cualann model can be replicated and scaled up.

“Through partnerships with local authorities and other AHBs [approved housing bodies] like Tuath and Respond, and when the land finance and construction resources are available, it can be scaled [up]. The Government model is depending on the private developer. That is the problem, they do not need to do that.”

Orla Hegarty, of the UCD school of architecture, told the conference that relying on the private sector to build affordable housing was a high-risk strategy for the State.

“Private developers are very vulnerable to changes in financial markets and we all saw what happened last time there was a crash,” she said.

Sinn Féin housing spokesman Eoin Ó Broin said that if the private sector was used to provide affordable purchase or rental homes, the cost would always be tied to market prices.

“The private sector cannot, on the basis of the economic models of construction and development, deliver affordable housing, so let’s stop trying to make them do that.”

Affordable housing had to be provided by the “State, approved housing bodies nd co-operatives,” he said.