Mixed views after Cabinet agrees to vote on replacing Eighth 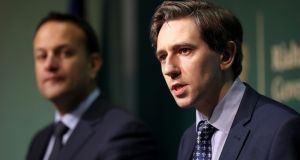 It is offensive to suggest that Irish women would seek an abortion to avoid having a child with a disability, Minister for Health Simon Harris has said.

Mr Harris pointed out that the Oireachtas Committee on the Eighth Amendment had voted specifically to avoid disability as grounds for abortion.

Speaking on Tuesday after the Cabinet agreed on Monday night to propose a referendum on abortion to take place in early summer, the Minister said “it is offensive to suggest that women in Ireland are seeking abortions for this”.

Mr Harris said he had been contacted by parents of disabled children who did not want their child to be “manipulated” for the debate.

“I have no wish to use citizens to suit any political narrative. Nobody has the right to manipulate them,” he said.

The referendum will seek to replace the Eighth Amendment with a new constitutional provision specifically enabling the Oireachtas to legislate for abortion.

If passed, the new constitutional article would state that the Oireachtas may provide for the termination of pregnancy in accordance with law.

The Government will then introduce legislation in accordance with the report of the Oireachtas committee, allowing for abortion on request up to 12 weeks.

After 12 weeks, Taoiseach Leo Varadkar said on Monday night, abortion would be allowed only “in exceptional circumstances” where there was a serious risk to the life or health of the woman or where there was a fatal foetal abnormality

Mr Harris on Tuesday morning acknowledged that there are different views within the Cabinet. He said that Tánaiste Simon Coveney “is not a lone voice”, referring to Mr Coveney’s comments on Monday night that he will not support terminations up to 12 weeks of pregnancy.

Fianna Fáil backbencher Mary Butler, also speaking on RTÉ’s Morning Ireland, said that while she supported the referendum and the right of people to have their say, her position was that she wanted to continue to support the unborn.

She said she was against repealing the Eighth Amendment and said that two words had been conspicuous in their absence from the Taoiseach’s press conference on Monday night – “unborn child”.

“We are talking about taking the life of an unborn baby.”

Independent TD Mattie McGrath described the Taoiseach’s use of the words “safe, legal and rare” with regards to proposed abortion legislation as “completely misleading” and an effort to “open the door for this very lucrative industry”.

Mr McGrath said that “not many people were going to jump up and down in delight” about abortion being available without restriction up to 12 weeks “for the flimsiest of medical reasons”.

The differing views within the Cabinet mirrored those of the country, he said on RTÉ’s Today With Sean O’Rourke.

Fine Gael TD Kate O’Connell, who was also speaking on RTÉ’s Today With Sean O’Rourke, defended the Government’s position and said the focus needed to be on women before, during and after termination.

She said that Ireland was not looking to the UK or US models, but was instead looking at the Dutch model.

Ms O’Connell said that while she was pro-choice, she was “viscerally opposed” to abortion, but recognised that people ended up in situations where it was needed.

Independent Senator Rónán Mullen described the Government’s approach to repeal of the Eighth Amendment as a “don’t frighten the horses approach”.

He also said that the last time he had heard the word “solution” in relation to a human life was in his history book.

Mr Varadkar in a press conference on Monday had said: “So, we already have abortion in Ireland but it is unsafe, unregulated and unlawful. We cannot continue to export our problems and import our solutions.”

Senator Mullen said that Ireland has a lower rate of abortions because of the Eighth Amendment. He said he trusted the public but did not trust politicians and that he did not believe statistics quoted by Mr Harris about the use of abortion pills.

“They [politicians] want to get complete control of Ireland’s abortion laws. Our political establishment is saying you shouldn’t be making this decision, it should be us,” he told Newstalk’s Lunchtime Live show.

Ms Doherty said we can no longer pretend that we don’t have abortion in Ireland, adding: “We need to grow up and face reality. This isn’t an issue that is right or wrong.”

“This is a personal issue that people are intelligent enough to make up their own minds on and then the legislation will follow,” she told RTÉ’s News at One.