Locals concerned about Oughterard asylum centre to protest around the clock 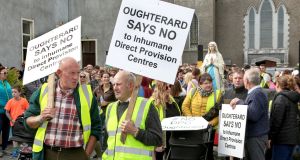 A campaign to stop the potential opening of a direct provision centre in Oughterard, Co Galway has been stepped up with a round the clock protest being maintained outside the gates of the disused hotel where it may be located. File photograph: Joe O’Shaughnessy.

A campaign to stop the potential opening of a direct provision centre in Oughterard, Co Galway has been stepped up with a round the clock protest being maintained outside the gates of the disused hotel where it may be located.

Locals voted overwhelmingly against the centre for asylum seekers at a public meeting on Wednesday and about 1,500 people on Saturday marched 3km from the town to the Connemara Gateway Hotel.

The silent procession, which started on the grounds of Oughterard’s Catholic Church, was organised by a committee set up to stop the Department of Justice from opening the centre in the shuttered hotel.

Though many participants wore yellow vests and were advised by organisers to wear hi-viz vests, Rory Clancy, a local publican and committee member, said the demonstration was not linked to any right-wing group.

The 24-hour protest started immediately after the end of the peaceful march and more than 20 people wearing yellow vests stood with placards outside the fenced-off hotel.

Workers who turned up to continue the refurbishment works on Saturday at the site turned away when they saw the protesters blocking the entrance. Work started on the building some weeks ago, which raised the alarm among locals when it was discovered that there was no planning process involved.

Mr Clancy said the protest had escalated and would now run around the clock to highlight that locals do not want a direct provision centre in their community.

The action group’s committee was set up following last week’s public meeting at which Independent TD Noel Grealish made comparisons between what he described as “good Syrian Christians” and “economic migrants from Africa” whom he called spongers.

Many in Oughterard have pledged their support for the TD’s remarks but despite calls for an apology, he has not made any public comment since.

There was no mention of the town’s recent unrest at either of the two Sunday Masses but Rev Lynda Peilow, rector of Oughterard, prayed for the community and for those supporting people seeking a better life.

Bishop of Limerick Brendan Leahy issued a statement on Sunday saying that racism and intolerance should have no place in Irish society.

“In a rapidly changing Ireland, we all have to work together to respect everyone and that means a complete avoidance of the use of offence language. It means building of relationships at local level so that everyone can feel welcome wherever we gather. Racism, intolerance and sectarianism should have no place in Ireland today,” he said.

“Now we welcome others coming to our shores. How we speak of them is important. To denigrate others is cheap. To build them up is noble. To be loose with our tongue is like spreading a fire. And that is never good.”

Fr Tony Flannery, a former Redemptorist missionary who is currently in dispute with the Vatican, asked on Twitter why the silent protest started from the grounds of the parish church.

“As a Galway man, I am concerned about what is happening in Oughterard. No doubt there are genuine concerns, but this increasingly seems like something much darker and more ugly. And the march started from the church; what is that about?”