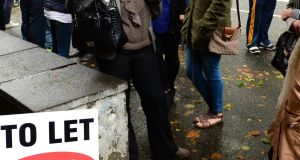 Since January 2016 “housing assistance” has been a ground on which it is explicitly illegal to discriminate in the letting of housing. Photograph: Bryan O’Brien

There is “systemic discrimination” by landlords against people dependent on housing benefits and it is “unreasonable” to expect individual victims alone to fight this, the leading human rights authority warns in a report to be published on Monday.

One of the most common reasons people contact the Irish Human Rights and Equality Commission (IHREC) for advice is because they have been discriminated against as they receive rent supplement or the housing assistance payment (HAP), it says in its annual report.

Since January 2016, “housing assistance” has been a ground on which it is explicitly illegal to discriminate in the letting of housing.

Though rental advertisements can no longer say, “Rent allowance not accepted” or “HAP not accepted”, agents and landlords can demand “professional references” as a means of filtering out people who may not be able to access the labour market – particularly single parents or those with disabilities.

Alternatively, while a person on HAP may be invited to a viewing, they often fail to secure a lease when competing with a person not dependent on housing assistance.

Cases challenging this discrimination have succeeded at the Workplace Relations Commission, says IHREC. But there have been few cases and the “discrimination will simply go unchallenged unless an individual takes action”.

“For individuals who may be at risk of homelessness and are focussed on finding a place to live, it is unreasonable to expect that they can refocus their energies on pursing a complaint ... Enforcement of the ‘housing assistance’ ground before the WRC alone is not and cannot be the solution to this problem and further initiatives will need to be explored if this issue is to be comprehensively challenged,” says IHREC.

The commission also highlights a “pattern of discrimination” against asylum seekers trying to get work. Since June 2018, asylum seekers who have not had a first decision on their asylum application and have spent nine months in the asylum process, may apply for work.

This follows a 2017 Supreme Court decision that the absolute ban on asylum applicants working was unconstitutional, in a case know as NHV v Minister for Justice.

“Applications for legal assistance brought to the commission showed a pattern of discrimination that in practice may thwart the Supreme Court judgment in NHV.”

The “significant administrative barriers” faced by asylum seekers included difficulties opening bank accounts and exclusion from applying for driving licences. These barriers must be overcome, says the commission.

During last year, for the first time, IHREC asked several statutory bodies to carry out “equality reviews”. These included local authorities in their provision of housing and homeless services, and the HSE in how drug-treatment clinics carried out drug tests, particularly the direct supervision of people giving urine samples.

In their review, the four Dublin local authorities said the practice of refusing foreign nationals social housing and emergency accommodation on the same basis as Irish people and instead directing them to a unit operated by the Department of Social Protection had ended.

However “serious concerns” remained about how a Department of Housing circular was being applied in a way that still excluded some people, especially EEA nationals who qualified for social housing supports, from those supports.

If this is happening, it is illegal discrimination and IHREC is in contact with local authorities and the department about it.