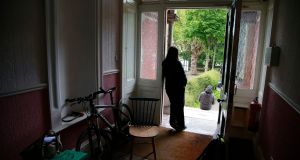 A group of low- and middle-income tenants in Dublin 4 facing homelessness because their landlord plans to sell up have appealed to their TD, Minister for Housing Eoghan Murphy, to intervene.

They argue their landlord, Michael Whelan snr of Maplewood Homes, should not be allowed to remove them from their homes to sell them, adding that 25 tenants who already left did so on foot of invalid termination notices.

Each house, in some disrepair, is subdivided into 15 bedsits and flats. Most of the households have already left, having received notices on March 28th, 2018.

In these, property management company John Ryan Estate Agents said Mr Whelan “intends to substantially refurbish or renovate... the property... in a way which requires the dwelling to be vacated”. The tenants were told: “Planning permission is not required.”

However, one of the tenants contacted the Citizens Information Centre, where it was noted planning permission was required as the properties were protected. The centre contacted Mr Ryan pointing out the need for planning.

On October 10th, tenants were issued with updated notices saying planned works had been modified and were now exempt from planning. The tenants, through the Citizens Information Centre, argued the planned works did not now require vacant possession.

On November 1st, Mr Ryan replied by email, saying “my client’s position remains the same”, adding that if the tenants do not leave, “we will initiate a case with the Residential Tenancies Board for overholding”.

However, the RTB ruled against Mr Whelan. In five separate orders, dated between February 8th and March 1st, 2019, the original March 2018 notices were ruled “invalid”.

On March 25th, the tenants were issued notices on the grounds that Mr Whelan “intends ... to enter into an enforceable agreement for the transfer to another ... of the whole interest” in the properties.

The houses are for sale “with vacant possession” with an asking price of €2,750,000 each. It is understood both have gone “sale agreed”.

Among the tenants still there is Vera Avellanosa, her husband, and children aged 15, nine, eight and four. They have been there seven years, paying €600 a month for two rooms – a bedroom with two double bunks and a living/kitchen area with a tiny bathroom.

The younger children attend St Brigid’s national school on Haddington Road, while the older daughter attends Sion Hill secondary school. The couple believed the first notice was valid and have been looking for housing since.

Both are originally from the Philippines and work in nearby St Vincent’s hospital, as a care assistant and in the catering department, bringing home about €3,000 a month. They send about €400 a month home to elderly parents.

“I have sent a ton of emails on Daft but no one accepts us,” says Ms Avellanosa. “We got one viewing for a house, for €2,100. We thought maybe we could get someone to share, to help with the rent. But the agent said, ‘I will come check who is living here every month.’ I don’t like to be trouble but we are so scared now.”

Bearnaí Mac Seiridh, a retired office worker, has lived here for 15 years, paying €120 a week for a bedsit. “We know the buildings aren’t in great condition but we would work with the landlord – move out of the way while any work is being done.”

Helen Wang, her husband and daughter (9) left last August after seven years. They had paid €600 a month for a “very small” flat and are now paying €1,850 for a house in Knocklyon, which is two buses and more than an hour away from their daughter’s school, Shellybanks national school, in Ballsbridge. They are in serious financial distress and would like to return to Elgin Road.

Mr Mac Seiridh believes former neighbours such as the Wangs should be allowed to return due to the “invalid notices”.

The five neighbours have appealed to the RTB, arguing the Tyrellstown amendment should apply, whereby a property with more than 10 tenancies cannot be sold with vacant possession. They say if invalid notices had not been issued last year there would be 30 intact tenancies.

The tenants wrote to Eoghan Murphy on June 6th, asking him to ask Dublin City Council to buy the properties, saying they could then be let as social housing. “This would prevent us from becoming homeless,” they said. His spokesman said the correspondence had been “only recently received” and “the matter is being progressed”.

A spokeswoman for Mr Whelan said he was “in full compliance with the law and now awaits the ruling from the RTB”.

John Ryan Estate Agents did not respond to emails or phone calls.