June the busiest month for deportations so far this year 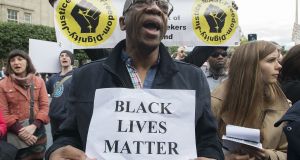 Lucky Khambule from the Movement of Asylum Seekers in Ireland at an anti-racist rally in Dublin in 2016. Mr Khambule says he has noticed a rise in the number of people seeking assistance after receiving a deportation order during August. Photograph: Dave Meehan

June has been the busiest month for deportations from Ireland so far this year with 20 people deported.

A total of 117 people have been deported from the State so far this year, according to data released by the Department of Justice.

While the frequency at which people are removed from the country rises and falls at different points during the year, human rights lawyer Wendy Lyon says the number of letters informing people of deportation peaks during the month of August.

“There’s certainly a perception among practitioners that we do notice this happening more in August,” Ms Lyon said, adding that asylum seekers had just 28 days to challenge the deportation and apply for a judicial review. “It’s not just ourselves on holidays but barristers too who you would need to go to into the High Court. They know it’s much more difficult for us to do anything for our clients at that time of year. The courts aren’t back until October.”

Lucky Khambule from the Movement of Asylum Seekers in Ireland has also noticed a rise in the number of people seeking assistance after receiving a deportation order during August. Mr Khambule said deportations were being carried out more “quickly and quietly” since the introduction of the International Protection Act nearly three years ago and noted “a lack of appetite” from solicitors from the Legal Aid Board once deportation orders are served.

A spokesman from the Department of Justice noted that deportation orders “are not served lightly” and that “the applicant is given every opportunity to make their cases at all stages of the process”.