‘Jews were not welcome in Austria’: How one family survived the Holocaust and came to Ireland 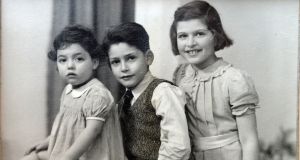 Walter Sekules, who was held in Soviet camps during the second World War, pictured with his sisters Leah and Ruth (right) in 1948 after arriving to Ireland. Copy photograph: Dara Mac Dónaill

Walter Sekules (79) has lived in Kilkeel, Co Down for much of his adult life. “I came to Kilkeel almost 70 years ago, so I guess you could say I am fairly local now,” Sekules quips, with an accent that still retains a significant percentage of German and Russian intonation.

Sekules was born in Tallinn, Estonia, in 1940 to parents Edith and Kurt, who had fled Austria two years earlier. The family then spent some years in Soviet detention camps, including Oranki in Gorki in modern-day Russia; Aktyubinsk in modern-day Kazakhstan; and Kok Uzek at Karaganda, also in Kazakhstan.

Edith, now deceased, published a memoir in 2000 about these years, Surviving the Nazis, Exile and Siberia.

In it, she recalls: “The hardest part of being a prisoner was not the loss of freedom or being forced to be in a group all the time but that fact that all decisions were made for you by someone else.”

As her son points out: “These camps were not extermination camps.”

The Sekules and all the others imprisoned there lacked liberty, but as Edith wrote: “We had the advantages of having a roof over our heads, a minimum of food, clothing and medical attention.”

They were not to know until the war ended, and the hellish stories from central European concentration camps emerged, how fortunate their decision to flee Austria in 1938 had been.

After the war, the Sekules settled in Northern Ireland, where other family members had moved.

“Jews were still not very welcome in Austria then,” Walter says, who was nine when the family moved to Kilkeel and set up a knitwear business, which still survives today, although it employs far fewer people.

Walter continues to manage Kilkeel Dancing Hose; a business that produces hand-loomed tartan socks made for Scottish Highland dancers, which are shipped all over the world. There is a staff of just two. A pair of these socks sell for between £120 and £150.

He has no plans to retire. “As long as the orders keep coming, we will carry on.”