Irish Autism Action to receive half of Pyjama Day funds 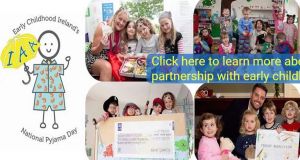 IAA chief executive Brian Murnane has indicated the charity it will now be able to submit its financial accounts for 2016, the publication of which he said had been delayed due to uncertainty over the funds. Illustration: Irish Autism Action website

Irish Autism Action (IAA) is to receive just over half of €300,000 from last year’s Pyjama Day fundraiser, with the remainder going directly to educators supporting children with autism.

It is unprecedented in the 13-year history of the Pyjama Day fundraiser, due to be held this year on Friday, March 3rd, that all the proceeds have not gone to the nominated charity, as happened when IAA received the full €312,000 from the 2015 edition.

On Tuesday, Early Childhood Ireland, which administers the funds from Pyjama Day, said it had “amicably concluded” its relationship with the charity, which came in for heavy criticism last year when it drastically reduced the number of families receiving frontline autism supports.

Early Childhood Ireland announced on Tuesday it would make a payment to cover a behavioural analyst and other specialised staff within IAA. The Irish Times understands that €161,000 of the €300,000 raised will go to IAA.

A breakdown of the Pyjama Day funds is covered in a letter to Early Childhood Ireland members, with the rest of the money being used to provide training for early years educators supporting preschool children with autism once the agreement is ratified by the Charities Regulator.

The autism network had been the chosen beneficiary again last year, but in August Early Childhood Ireland decided to freeze the funds raised from Pyjama Day 2016 amid questions over financial controls at IAA and how the money would be spent.

The funds remained frozen for almost half a year until IAA could provide assurances over its intentions for the money and its use of Pyjama Day donations from 2015, and the process culminated in a period of legal arbitration, following which it was decided to release €161,000 to IAA.

IAA chief executive Brian Murnane has indicated the charity it will now be able to submit its financial accounts for 2016, the publication of which he said had been delayed due to uncertainty over the funds.

“The service that we provided was multifaceted, it covered the creation of an early intervention-specific dedicated website.

“We also did a nationwide training programme for staff in Montessoris and crèches and pre-schools, we provided that in 26 counties,” he said.

Early Childhood Ireland has also announced it will change the way it distributes donations raised from Pyjama Day, starting this year, with philanthropic organisation The Community Foundation for Ireland helping to distribute smaller amounts to three chosen charities over a three-year period.

It is thought Early Childhood Ireland sought to introduce the more rigorous controls as a direct result of the difficulties encountered regarding the distribution of funds from last year’s event.