A new generation of people, many born since 1983, want to have their say on the issue

Amnesty International and other campaign partners demanding the Repeal of the 8th Amendment in 2016. Photograph: Nick Bradshaw

Eimear Clarkin from Wexford at a Repeal the 8th Ammendement rally in Dublin in 2014 after the arrival of the Abortion Pill bus from its tour of Ireland. Photograph: Aidan Crawley

Thousands of people will march through the streets of Dublin today demanding that the Eighth Amendment to the Constitution, which underpins Ireland’s strict anti-abortion laws, be removed.

It is the fifth annual rally, and comes at a time when the abortion issue is moving steadily up the political agenda once more.

The programme for government promised a citizens assembly to discuss the issue before it moves to the Oireachtas, and that assembly will meet in Dublin for the first time next month. It is likely to issue recommendations early next year.

Many of those who remember the bitterly divisive abortion debates of the past may not relish the prospect of their return.

But among a whole generation of people who have grown up since the amendment was passed in 1983, since the X case in 1992 and even since the most recent referendum in 2002, there is a desire to have their say.

The abortion wars are coming again, and they’re coming soon.

Both sides are preparing intensively. When feminist writer and campaigner Gloria Steinem visited west Cork this summer, she asked to meet pro-choice campaigners to learn how their campaign was progressing.

A dinner was put together involving campaigners, academics, student leaders, politicians and journalists.

The amendment was among the main topics discussed, although those present say it was not a “planning meeting” for the repeal campaign.

Since last year, her group has been engaged in a “Life canvass”; their aim is to have knocked on every door in the country by the time the referendum comes around.

“There is no desire for a UK-style abortion regime in Ireland, ” she says. “Even people who see abortion as a necessity in some cases see it as a bad thing. I don’t think that the Irish people will vote for 90 per cent of Down syndrome children to be aborted, or for babies to be aborted because they are girls. That’s the reality in the UK.”

Every anti-abortion campaigner who spoke to The Irish Times complained about the media bias against them.

“Every single thing the pro-choice does is reported,” said one source. “And it’s really hard for us to publicise what we are doing.”

David Quinn, a director of the Iona Institute, says that “by and large, the public are hearing only one point of view. That’s has to have an effect.” 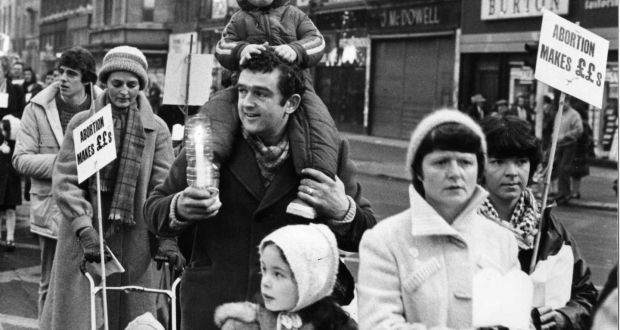 “So what we campaign for is Ireland to be human rights-compliant on abortion – that women should have access to abortion at least in case of rape, incest, fatal foetal abnormalities and where the health, not just the life of the woman, is threatened. That’s the minimum framework we are campaigning for.”

Opponents fiercely dispute his interpretation of human rights law, and O’Gorman knows he will be asked about the human rights of the baby.

“I don’t share that view,” he says. “Neither does international human rights law.”

It is a fact that the UN committee on human rights has ruled against Ireland in a case taken by a woman, Amanda Mellet, who travelled abroad for an abortion having been told her baby was suffering from a fatal foetal abnormality.

The Government has yet to respond substantially to the UN’s findings, but even if it doesn’t, there is little the UN can do except keep writing to the Government. There is no domestic enforcement of UN human rights decisions.

O’Gorman was one of the faces of the successful campaign for same-sex marriage last year, and while the issues are different, he says he recognises some parallels in the growth in support for changing the Constitution again.

It’s a refrain heard from many pro-choice supporters who spoke to The Irish Times in the past week.

But others are wondering if the campaign is spending its time talking to itself.

“What is the model?” asks one person long associated with the pro-choice movement.

“It’s one thing saying ‘Repeal the Eighth’ but what replaces it? The street fighters aren’t thinking about anything but repeal, but you need to articulate what replaces it before you go for repeal. They’re putting the cart before the horse.”

Talk to politicians in all parties and you hear similar views. For most of them, the question isn’t so much repeal or not – it’s what replaces it.

This will be one of the central questions that the forthcoming citizens assembly will discuss. The body will hold its first meeting in three weeks’ time.

The assembly is a political kick to touch, of course, taking the divisive issue of abortion off the immediate political and legislative agenda.

Both sides are comfortable in the certainty not just that they have right and truth and justice on their side, but that their view is shared by the majority of the Irish people.

But what do opinion polls say about the state of public opinion on abortion? There have been many opinion polls on the issue in recent years.

In June, an Irish Times/Ipsos MRBI poll found that 67 per cent of people said they were in favour of repealing the amendment so that, for example, abortions might be permitted in cases of rape or fatal foetal abnormality.

Looking at all the polls over a period of time, it seems fair to say there is support for some liberalisation of Ireland’s abortion laws – but not for the establishment of a UK-style regime.

Irish Times polls have found, for example, support diminishing as wider access to abortion is suggested.

Only a minority support making abortion available in all cases where a woman seeks one. Data from other polls would tend to support that finding.

If that is what is eventually legislated for, the task of “drawing the line” that limits access to abortion will become a complex and divisive one.

It is clear that when looked at over a longer period of time – two decades, say – there is a gradual move towards a more pro-choice position among Irish people.

Ireland is more pro-choice than its current laws allow for, but it is also probably more anti-abortion than most similar countries.

Another way of saying this is that while Irish people may be in favour of more access to abortion in this country, it is by no means clear how much more access they want.

They are probably not sure of that themselves. But they will have to make up their minds soon enough.

Man jailed over robbery of amputee in wheelchair