Minister orders review into employment of clerics, some of whom earn €50,000 a year 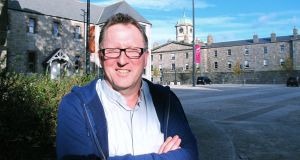 Fr Alan Hilliard: Is one of five chaplins at DIT and sees his role as less religious, more one of “accompanying students” while they are at the college. Photograph: The Irish Times

The Minister for Education has ordered an investigation into the way public funds are used to pay for third-level college chaplains, some of whom receive €50,000 a year.

The majority of chaplains in universities, institutes of technology and colleges of education are Catholic and usually male.

The Higher Education Authority (HEA) confirmed it was drawing up the terms of the investigation, which will examine the way publicly-funded colleges appoint chaplains.

Recruitment procedures and pay for chaplains vary widely, with some directly employed by colleges and other provided by churches as a contracted service.

Chaplains’ salaries are met by the colleges in some cases. In other instances they are paid by their churches, with their services contracted by the colleges.

Minister for Education Jan O’Sullivan has said appointments of chaplains to salaried posts in the public sector must comply with the sector’s appointment and procurement criteria. In addition, appointments should not breach the employment control framework which sets limits on the number of employees in the public service.

“The HEA is undertaking a survey on the recruitment of chaplaincy services and the exact details are currently being finalised as to the scope of the exercise,” said the spokesman.

A number of institutes of technology, which are secular institutions established by legislation, employ chaplains directly.

Waterford IT (WIT) directly employs one. A spokeswoman said: “Since the establishment of the college in 1970 the chaplain has always been appointed by the college on the recommendation of the Catholic bishop. The post has not been advertised nor have interviews taken place.”

She said the chaplain’s salary was funded by WIT and was based on the “lecturer salary scale”.

Letterkenny IT has three chaplains – Roman Catholic, Presbyterian and Church Of Ireland – but these are contracted from their respective churches.

Dundalk IT also has a contract for its chaplaincy service, with the Catholic Dioceses of Armagh at a cost of €30,000 per year, and an honorarium contract with the Presbyterian Church for €1,000 per year.

Trinity College, Dublin, which has four chaplains, said they were “appointed and paid by their churches. Trinity doesn’t provide a salary for chaplains”.

A spokeswoman for the Department of Education said: “It has been agreed with the HEA that they undertake a review of chaplaincy appointments in the third-level sector and while the exact details are currently being finalised, it is expected that the survey will look at the costs to institutions of providing chaplaincy services and the process used by institutions in procuring these services.”

Fr Alan Hilliard, who is one of five chaplains at Dublin Institute of Technology (DIT), sees his role as less religious, more one of “accompanying students” while they are at the college.

At DIT since 2011, he says the service he provides is different to that offered by student counsellors or health workers.

“It’s less formal. Often students might just knock on the door for a chat. They might come in to talk about bullying, problems with paying their fees, dealing with a suicide in the family, or general loneliness.

“For instance, the tragedy in Berkeley has really affected many of the students here.”

Eoghan Culligan (21) a student at DIT, Aungier Street, was among the six students who died when a balcony collapsed in California in June. “I was out in Berkeley after that and we held a memorial service here.”

He said he would not bring up religion with students. “If a student asked me to pray with them I would, but I would never suggest it.

“I find through my work as a priest I have developed skills I bring to the role as chaplain. I have worked with immigrants and I find that very useful working with an increasingly multicultural student population.”

A spokeswoman said DIT did not directly employ chaplains.

“The Institute has an agreement in place with two churches . . .The current cost to DIT of the service is €260,000 per annum to cover salaries and a small non-pay budget for events. This is paid to the respective churches on invoice,” she said.

The cost of the chaplaincy service came “out of the student services budget along with other services such as counselling, health centre, careers development etc.”