Balladeer was ‘effervescent . . . bubbling over with good humour’ 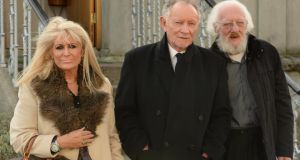 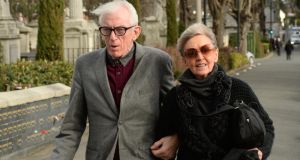 Shay Healy and his wife, Dymphna Healy, at the funeral of Jim McCann. Photograph: Cyril Byrne 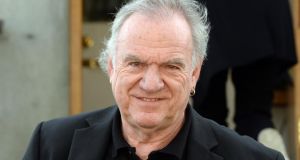 “He was one of the last great balladeers,” Coulter told the musicians, entertainers and others who gathered for the humanist service in the Victorian chapel at Mount Jerome cemetery yesterday.

The 70-year-old singer died last Thursday after a long illness.

Composer Bill Whelan recalled how he first came across McCann when the latter played Peter in Jesus Christ Superstar at the Gaiety in the early 1970s.

“A hypnotic mesmerism surrounded this man,” he recalled, adding that “to be McCanned” was “one of the most pleasant experiences in the known world. We invented that word [McCanned] to absolve ourselves.”

Singer-songwriter Ralph McTell remembered how on a trip with Jim McCann to Australia in 1975, “immediately a bond of friendship grew up through laughter and we became very close”. He “had his demons, but also an angel sitting on his shoulder, the good Phyl [Jim’s wife]. Jim enriched my life and I will never forget him.”

Dubliner John Sheahan said McCann was “effervescent . . . bubbling over with good humour”. He recalled how McCann and Luke Kelly played Peter and Herod, respectively, in Jesus Christ Superstar and that “during the run Peter and Herod became very good friends.” It was Luke Kelly who invited him to join The Dubliners in 1974, he said.

Tributes were also paid to the late singer by his brothers Shane, Paul and Brian. Shane remembered how Jim got his first guitar at 13, while Paul recalled the family excitement when Jim made number one in the charts with The Ludlows in 1966. Brian said the brothers were all made to listen to Sergeant Pepper’s Lonely Hearts Club Band when it came out. “He conducted a tutorial on the Beatles and their brilliance.”