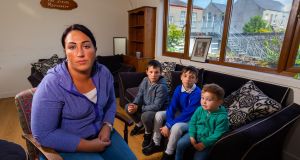 Michelle O’Brien and three of her children – Tommy, Jamie and Joey – at her emergency accommodation in Banagher, Co Offaly. Photograph: Tom O’Hanlon

Michelle and Patrick O’Brien and their seven children, aged between three and 14, have been homeless since June 2018 and say they are “weary and hopeless”.

The Tullamore, Co Offaly, family was initially placed in a hotel there. In early May, however, Offaly County Council moved them to a hotel in Banagher, Co Offaly, almost 40km and a 40-minute drive from the children’s schools.

On Monday, the Banagher hotel manager asked them to leave as he was taking in asylum seekers. He has confirmed this.

Ms O’Brien spent much of Monday in council offices in Tullamore as staff attempted to source alternative accommodation. Shortly before 5pm, as some family members were preparing to sleep in their car and others in a Garda station, she was told the Peter McVerry Trust had found a hotel in Trim, Co Meath, until Thursday. A receipt shown by Ms O’Brien, indicated this accommodation cost €260.25 per night.

On Thursday morning, the charity was inquiring about hotels for that night in Laois, Tipperary and Westmeath.

“They called me about 2pm and said they had a hotel for us in Mullingar, until Monday, and a €30 voucher for diesel. I don’t know what we are going to do after,” Ms O’Brien said on Thursday evening.

“We came back to Tullamore this morning for school and a GP appointment. Now we are going to Mullingar. We’re tired now at this stage. It’s awful.”

While the younger children are “kind of getting on with it”, the older ones “are struggling – they hate being far away from their friends”.

Their five-year-old son was born with a diaphragmatic hernia, meaning there is a hole in his diaphragm causing breathing problems. He has problems swallowing, as well as behavioural difficulties which his mother says have been exacerbated in the past year.

“He really needs a house and space where he can roam,” says Michelle. “He’s frustrated and is acting out. A hotel isn’t suitable for him. I am very mindful that there are guests who are there to relax and unwind. It’s very stressful trying to mind my boys, very stressful. I’m weary. We’re feeling quite hopeless.”

Among those advocating for the family are the Offaly Traveller Movement and Tusla, the child and family agency. In a letter to Offaly County Council, dated June 21st, a Tusla social worker said she was “extremely concerned about the children’s living conditions”.

“There are no child-protection concerns in relation to the parenting the children are receiving”, the social worker said, describing Ms O’Brien as an “extremely dedicated and determined parent to her children”.

The parents would be “better able to care for their children in the long term if they had a suitable residence with basic services”, the social worker wrote, asking if “an immediate plan can be put in place in respect of the family’s housing circumstances”.

A spokeswoman for the Peter McVerry Trust said she could not comment on the family’s case. Emergency accommodation would ordinarily be sourced in one place, pending the identification of a suitable housing unit, she said.

However, this was not always possible due to factors such as family size and the availability of appropriate emergency accommodation, “particularly during the holiday season”.

The trust was working with 160 families in 14 local authority areas, including Co Offaly, she said. Offaly County Council said it could not comment on an individual case.