Housing emergency must be declared, Right to a Home summit told 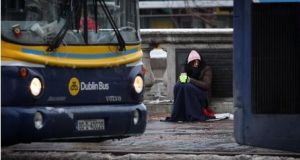 “Housing is not like other commodities. You can increase supply and the cost of housing can still increase...Homelessness is the most visible and extreme form of the violation of the right to housing.” File photograph: Getty Images

The Government must declare a housing emergency and call a referendum to insert a “right to housing” into the Constitution, trade unionists, legal experts and housing campaigners have said.

Karen O’Loughlin, head of campaigning with union Siptu, said secure housing was moving further and further out of the reach of middle- and low-income households, as well as younger people.

Speaking at the Right to a Home conference hosted by the Simon Communities, she said the spiralling cost of housing was particularly impacting upon women and their children, as the gap between costs and people’s incomes grew.

She said the right to housing was protected in the constitutions of 81 countries.

“The Government needs to declare a housing emergency and roll back the policy of the commodification of housing,” she said.

The conference, in Trinity College, Dublin on Thursday, examined how a constitutional right to housing could be achieved here.

Niamh Randall, national spokeswoman for the Simon Communities, said a “clear acknowledgment that increased private sector supply” will not provide affordable or accessible housing for thousands of households was now vital.

“Housing is not like other commodities. You can increase supply and the cost of housing can still increase...Homelessness is the most visible and extreme form of the violation of the right to housing.”

She said though the right to private property was protected in the Constitution, and this had been cited repeatedly as an obstacle to a Constitutional right to housing, she said there was also an acknowledgment that the right to property “ought to be regulated by principles of social justice and can be restricted in the interests of the common good”.

“In the current crisis it is clear that some restrictions on the right to property are justifiable, to reduce the number of people becoming homeless and also to restrict the numbers trapped in housing insecurity.”

A constitutional right to housing would not mean the right to a key to a home, said Maeve Regan, managing solicitor with the Mercy Law Centre. It would “put in place a basic floor of protection”, and compel the State to “protect the right to housing in balance with other rights” in terms of decision- and policy-making.

Among the policies that could be challenged if there was a right to housing would be if the Housing Assistance Payment and rent supplement did not meet market rents. The absence of legal aid to tenants wanting to challenge an eviction could also be challenged.

Ms Regan said though the Citizens’ Assembly had in 2014 voted by 84 per cent in favour a constitutional right to housing, this had not been considered yet by Government. She called on Minister for Housing Eoghan Murphy to refer this to the Oireachtas Housing Committee.

The right to housing was recognised in international instruments, including the 1948 Universal Declaration of Human Rights and the 1966 International Covenant on Economic, Social and Cultural Rights, she said, but it was not enforceable here.