Department of Housing data shows 10,148 without a home, down by 123 people 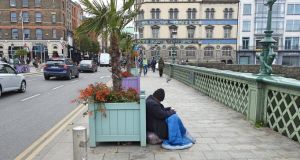 Minister for Housing Eoghan Murphy said it was important to note that the homelessness figures relate to a period before the Covid-19 emergency. Photograph: iStock

A charity claims the latest homeless figures highlight the scale of the vulnerability of homeless during the Covid-19 pandemic.

Simon Communities has described the situation facing more than 10,000- people without a home in the State as “a crisis within a crisis” as it had resulted from the failure to tackle the problem of homelessness and housing shortage.

It follows the publication of new figures by the Department of Housing which shows a reduction in the number of homeless people at the end of February.

They showed there was a total of 10,148 homeless individuals including dependents in February, 123 fewer than the previous month. However, the number of children who are homeless increased by 40 to 3,534.

Minister for Housing Eoghan Murphy said it was important to note that the figures relate to a period before the Covid-19 emergency.

He pointed out that 600 new places had been secured since the start of the crisis with more to come if necessary. Mr Murphy said the priority over the coming weeks was the safety of everyone housed in emergency accommodation.

The Minister said local authorities and NGOs had been working incredibly hard to ensure extra capacity was being made available in emergency accommodation which would allow individuals to self-isolate and engage in proper social distancing measures. Mr Murphy said he had guaranteed additional funding to city and county councils to support their work.

“Local authorities continue to work to move as many people out of emergency accommodation into homes as possible,” he added.

However, Simon Communities spokesman, Wayne Stanley, said the figures were a stark representation of the number of people exposed in the coronavirus pandemic because of the failure to address the homeless crisis.

“It is devastatingly clear just how essential a secure and affordable home is to our social and economic wellbeing and, crucially, to our health,” Mr Stanley said.

Simon Communities acknowledged the collective effort being made by local authorities, the HSE, government departments and NGOs across the country to ensure people were safe.

Mr Stanley said political parties involved in talks on the formation of a new government needed to reflect on the impressive capacity shown in the State’s response to the Covid-19 crisis.

He said it should remind politicians that such ambition was needed to address the housing and homelessness crisis.

Almost 70 per cent of all homeless individuals are based in Dublin. Another homeless charity, Depaul, said the latest homeless figures remained “troubling”.