Measures include rates relief for businesses and support for the vulnerable 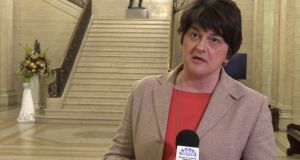 Northern Ireland is escalating its response to the coronavirus emergency in light of British prime minister Boris Johnson’s call for “drastic action” to tackle the “fast growth” of Covid-19.

Mr Johnson’s statement on Monday evening that all people in the UK should avoid pubs, clubs and theatres, stop all non-essential contact and travel, and work from home if they can prompted a similar response in Northern Ireland.

On Monday evening seven new coronavirus cases were confirmed in Northern Ireland, bringing the number of cases to 52.

As elsewhere, the social and economic impact of Covid-19 continues to bite in Northern Ireland.

The Northern Executive met on Monday night to consider its continuing response to the crisis. In a statement, Executive Ministers said they had agreed to bring forward a package of proposals “including rates relief for businesses; options for the continuation of free school meals in the context of schools closing and steps to protect the most vulnerable in society, including the homeless, and support for the elderly, who are our priority”.

Ministers also agreed to hold special meetings of the Executive to discuss budget allocations in light of the pressure Covid-19 will have on departments and to halt non-critical work and allocate resources into the wider rapid response effort.

“These are unprecedented times,” said First Minister Arlene Foster after the meeting. “Further steps are being introduced to keep people safe. We know the burden that some of the necessary measures will have on families and individuals but it is important that they are followed and society pulls together to lessen the impacts of this disease,” she added.

The Deputy First Minister Michelle O’Neill said as the “pandemic continues to escalate globally our priority is protecting our people and saving lives, which is paramount”.

The DUP economy Minister Diane Dodds told the Northern Assembly that the tourism industry was being particularly badly hit and that 3,000 such concerns could go out of business if there were no help.

“Hotels and restaurants are seeing a sharp fall of occupancy levels. Booking. com forward bookings are down 80 per cent. Titanic Belfast is experiencing a 50 per cent drop in visitor numbers,” she said.

Colin Neill, chief executive of Hospitality Ulster met First Minister Arlene Foster and Deputy First Minister Michelle O’Neill on Monday. So far there has been no official instruction for pubs and restaurants to close although a number have closed voluntarily.

And while Mr Johnson did not specify closing schools and universities, as has happened in the South, his call for “drastic action” seemed to imply that such a response would happen soon.

Nonetheless, the DUP education Minister Peter Weir continued to resist calls to close schools and universities and has insisted he won’t be swayed by social media.

While Sinn Féin, the SDLP and the Catholic primate Archbishop Eamon Martin have called for schools to shut, Mr Weir said earlier on Monday that now is not the time for such action while acknowledging at some point they must close.

Mr Weir added that the ramifications “of parents being removed from their current jobs and instead staying home” would be very significant.

Late on Monday night the Assembly speaker Alex Maskey announced Parliament Buildings, Stormont is to close to the public from Wednesday. Assembly business will continue, he said.