Funeral of Fergus Linehan told of kindness and principles 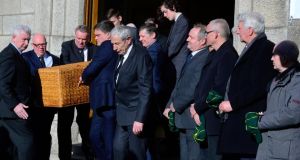 Family and members of the Cavaliers Cricket Club at the funeral of Fergus Linehan in Blackrock, Co Dublin. Photograph: Cyril Byrne / The Irish Times

Fergus Linehan’s funeral was an occasion to mourn “but also to give thanks for our gentle, kind, brilliant, generous, erudite husband, Dad, Papa, who loved us all so unconditionally and who taught us so much,” his son Hugh told mourners in St John the Baptist Church in Blackrock, Co Dublin on Friday.

Speaking at the end of the funeral Mass, Hugh Linehan recalled how “growing up, we took it for granted that Dad was a playwright, a satirist, a radio scriptwriter, a lyricist, a critic, an editor, often at the same time.

“He was arts editor of the Irish Times. He had a succession of shows at the Abbey. He had Get An Earful of This running every Sunday night on the radio, and he was launching into the Des and Rosie revues which were a terrible burden to us siblings because half the country thought that Des [Keogh] was our dad.”

He said his father liked working in comedy as it was “an area that didn’t take itself too seriously. He was a shy man who loved to make people laugh.”

His father, however, was “an appallingly bad actor, so it was very cunning of him to fall in love with, and marry, a woman who would do justice to his lines in so many shows,” he said in a reference to Mr Linehan’s wife Rosaleen.

Mementoes presented by Mr Linehan’s grandchildren before the Mass included scripts of the revue Glory Be and the musical Mary Makebelieve, his novel Under the Durian Tree and a cricket ball.

After the Mass members of the Cavaliers Cricket Club, the theatre world’s cricket club of which Mr Linehan was president for many years, formed a guard of honour as his wicker coffin was carried from the church.

Chief mourners were his wife Rosaleen and their children Hugh, Evanna, Fergus and Conor. The large congregation included a cross section of people from the theatre and arts world generally as well as very many former and current colleagues at The Irish Times.