Feeding the homeless: ‘It is upsetting how many children come now’

Over the course of one day The Irish Times visited services providing free or low-cost food to the poorest, the homeless and the most vulnerable residents of the capital. Video: Kathleen Harris 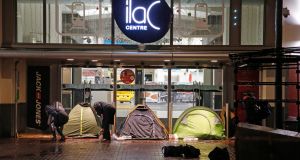 Rough sleepers set up a row of tents at the Ilac Centre, off Henry Street in Dublin. Photograph: Nick Bradshaw/The Irish Times

Every day across Dublin, thousands of people rely on others for food for a variety of reasons.

Over the course of one day The Irish Times visited services providing free or low-cost food to the poorest, the homeless and the most vulnerable residents of the capital.

Some provide food on the streets, bringing it to where people are crouched or lying on bridges or the streets, or sleeping on cardboard, the ground or in tents. Some set up stalls at night, some serve meals on their premises and others bring meals to people’s homes.

From 5am, on Wednesdays and Fridays, Dublin Simon volunteers are making flasks of coffee, tea and soup and packing food bags with sandwiches, fruit and chocolate at their base on Capel Street. Dublin Simon gets no State funding for this service.

By 6am, three volunteers, led last Wednesday by Alan O’Sullivan, are quietly approaching two tents, a person in each, outside Axa Insurance on Wolfe Tone Street. Just up from the tents are two sleeping bags, sheltered from lashing rain. The volunteers leave food bags by each person.

About 20 people are sleeping rough along Henry Street and Mary Street. In the doorway of McDonald’s, behind a makeshift cardboard barricade, are two men in their 20s.

We ask no questions of the people who come, but no one queues to come to a place like this unless they need to

Outside a side entrance to the Ilac Centre are four tents with two people in each, and three others in sleeping bags. At least two are women.

“When we started off this morning outreach three years ago, you might see five or so sleeping on Henry Street. Now you are seeing five or six people in one doorway. It seems to be just getting worse and worse,” says O’Sullivan.

Around the corner, outside the GPO, a man is almost covered by a sleeping bag, though his bare, sandalled feet are exposed. The temperature is six degrees.

On Marlborough Street, opposite the Flowing Tide pub, a man in his 60s is lying on a single sheet of cardboard, with just his jeans and jacket for warmth.

Three more are asleep on Abbey Street. Grafton Street hosts men sleeping in the door of Tommy Hilfiger, Clarks and Aldo shoes. Three, including a woman, sleep outside the Gaiety Theatre, while more sleep outside Stephen’s Green Shopping Centre.

The latest figures from the Dublin Region Homeless Executive show there are on average 110 people sleeping rough in the city each night.

By 6.30am, the Capuchin Day Centre on Bow Street is open. It used to open at 7am but now opens earlier “to get the rough sleepers in”, says Br Kevin Crowley.

It will serve 350 people a hot breakfast, give out 1,700 food parcels with such basics as tea, sugar, pasta and cheese, and serve up to 800 for lunch.

“It is upsetting to see how many children come now, in the mornings and afternoon. The numbers are growing. We ask no questions of the people who come, but no one queues to come to a place like this unless they need to,” he says.

Sometimes I have to choose between food and keeping the house warm. Coming here, it helps. And I meet people

“The need is there and it is real. For so many, of course, the underlying reason is housing – the cost of rent, the lack of housing.”

Monica Ahearne (70) comes daily on the Luas from Tallaght for breakfast. She started coming after her husband, who worked in security, died suddenly two years ago. His funeral cost €7,000, she says, and she is still paying it off at €60 a week.

She was not entitled to the widowed person’s grant as she has no dependent children. She pays €32.50 in rent weekly, leaving her with about €130 a week from her State pension.

“Sometimes I have to choose between food and keeping the house warm. Coming here, it helps. And I meet people,” she smiles.

Across the quays, Merchants Quay Ireland has been open since 7.45am, serving breakfast to about 120 people with homelessness and/or addiction issues.

It will later serve about 80 people a hot lunch and 80 people an evening meal. From 11pm, its cafe will accommodate about 55 people overnight, providing them with a hot meal. Merchants Quay spends €700,000 annually on meals, of which 60 per cent is State-funded.

John Cuffe (54) has been homeless for seven weeks. He worked and lived in a hotel on Gardiner Street “for years” until it was repossessed just over a year ago. “I got 24 hours’ notice that I was unemployed and homeless,” he says.

He focused on finding somewhere to live, staying with friends until that arrangement broke down, when he presented as homeless. He has since slept rough, stayed in hostels and has now secured a bed nearby for six months. He comes to Merchants Quay for breakfast and then goes to the library. “I’m trying to go stage by stage. I do get down but I have a plan not to be in this system longer than 10 months.”

David Kiberd is manager of the Guild of the Little Flower Penny Dinners, on Meath Street, which serves breakfast to about 70 people a day and lunch to about 120. It charges 25 cent for lunch at a hot counter and €2 in a table-service dining room, and delivers about 60 meals-on-wheels daily. “Most of our customers live locally and come because it’s good value. Perhaps they cannot cook for themselves and for the company.”

Lunch is being served at various other centres across the city. Crosscare has community cafes in Dún Laoghaire and in the north inner city.

Joe McGarvey (70), a widower living in Hardwicke Street flats, comes to Crosscare daily for a hot lunch, which costs €3. “I live on my own. I can’t cook,” he says. He grew up in institutions, including the Artane industrial school. “I had a terrible life there, affected me very badly.”

He worked in hotels and later as an animal keeper for circuses. “I get €230 a week in the pension. My rent is €40, so the budget is tight.” The cafes are fully funded by the Dublin diocese.

Miroslav Sierakowski (34), from Poland, is having lunch at the Mendicity Institution in Dublin 8. The 200-year-old charity provides about 110 meals a day, mainly to men, more than half of whom are from eastern Europe. It runs a Community Employment scheme, with participants making wood and metal crafts, to help them into work. Mendicity promises assistance with employment and integration. Its meal service gets no State funding.

Sierkowski came to Ireland two years and got work with a wholesaler. After he was hospitalised for an extended period after surgery, he lost his job and then his rented room.

One of the greatest difficulties he faces – one echoed by several others – is an inability to get enough sleep when on the streets or in hostels. “It is hard to manage to get some work because every day is tired.” He is hopeful his participation in the Community Employment scheme will help get his life back on track.

I come here for a good meal because I find it very hard to eat. I get support here that I don’t get anywhere else

Although adults were the only customers until about 2015, now “an awful lot of families” come, requiring “more vigilance” by staff to ensure a child-safe environment, says Alison Cullen, catering manager.

Antonia Edgeworth (40) from Foxrock, who has come in from Dún Laoghaire, has been homeless “for years”. She is “waiting for a detox bed for the alcohol”.

“The staff here are gorgeous,” she says. “They have saved my life so many times. I come here for a good meal because I find it very hard to eat. I get support here that I don’t get anywhere else. They keep me going.”

It closes at 3.30pm, reopening at 6pm for homeless families with children, who will get a meal while they wait to find out where they will stay that night. This evening, there are three families, including 12 children.

The most recent data show that in the week of October 22nd to 28th, there were 1,295 families – including 2,800 children – in emergency accommodation in Dublin.

The data excludes the 886 people removed from Dublin’s homelessness statistics this year as part of a controversial “recategorisation” exercise by the Department of Housing.

I’d say out of all the years we’ve been sleeping rough, it’s just getting worser and worser

From 9pm, Dublin Simon’s nightly soup run is setting off – about 12 volunteers split into four groups, covering far more of the city than the morning outreach could.

Among those they reach is Raymond Mahady, who is from Dublin and has been homeless for “six or seven years”. He had worked as a painter-decorator but lost his sense of balance and had to stop.

He now lives in the Iveagh Hostel in Dublin 8 and likes to sit on a bench in the evening and “watch the world, with a beer ... I don’t think about what life could have been any more”.

About a third of those begging and bedding down for the night in the city centre are women, including Charlotte (23) from Mullingar and one elderly woman with a walking frame who did not want to be interviewed.

A number of grass-roots organisations are out, too, serving hot food from stalls. The Mobile Homeless Run is on Grafton Street and Feed Our Homeless is at College Green.

Back on Henry Street, a young couple is setting up one of four tents outside the Ilac Centre. The woman, who looks like a teenager but says she is in her 20s, is crouched in the tent, which was donated by the Simon Community, inhaling smoke through what appears to be a crack pipe. The couple, originally from west Dublin, say they have been homeless for years.

“It’s just very, very bad here now,” says the young man. “There’s been a group of about 10 sleeping here for about two weeks.

“It’s freezing here at night. I’d say out of all the years we’ve been sleeping rough, it’s just getting worser and worser. You’d think at this stage the Government would give us a bit of hope.”