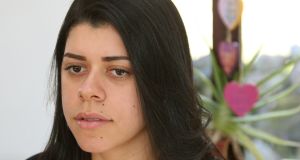 Paloma Aparecida Silva-Carvalho: was refused entry to Ireland when she arrived at Dublin airport’s Terminal 1 on Tuesday, and detained at the Dóchas women’s centre in Mountjoy prison overnight. Photograph: Joe O’Shaughnessy

The Brazilian government has complained to authorities about an increasing “number of alleged cases of mistreatment” of Brazilian nationals at Dublin Airport, a spokesman has confirmed.

André Baker Méio, the Brazilian embassy’s charge d’affaires, told The Irish Times the number of Brazilians refused entry to Ireland has increased from 258 in 2014 to 312 in 2015 and 489 last year.

“Unfortunately, the number of alleged cases of mistreatment brought to the attention of the embassy, in this specific context, has also increased. In most cases, Irish authorities indicate that the referred Brazilian nationals were trying to enter the country in order to find a professional occupation, despite claiming otherwise.

“While acknowledging the Irish authorities’ right to decide who should be allowed to enter the country, we think that the holding of potential visitors in prisons for immigration issues is a matter of concern.

“We have conveyed our concern regarding this matter to the Irish authorities on previous occasions.”

The statement comes as Paloma Aparecida Silva Carvalho (24), who was refused entry to Ireland when she arrived at Dublin Airport’s Terminal 1 on Tuesday, considers whether to seek a judicial review of the refusal.

Though she had a ticket to leave Ireland on September 25th, she was denied entry and detained at the Dóchas women’s centre in Mountjoy prison overnight. The authorities planned to remove her on the next available flight to Basle, Switzerland – from where she had flown – at 3am on Thursday. She was, however, released at about 10pm on Wednesday, with permission to stay for 10 days.

She has described having to change out of her clothes at the prison and being held overnight in a room with a committal prisoner. “I think it was the longest night of my life,” she said.

A number of South American nationals have contacted The Irish Times to report what they described as being “treated like a criminal” at Dublin Airport.

Karina González, from Venezuela, said she was not believed when she arrived at the Dublin airport Terminal 1 from Spain, in May this year. She said she had studied English here in 2015, had many friends here and was visiting.

“Unfortunately, the officer did not let my entry to the country because they did not believe my intention was to do tourism in Ireland, even though I explained to them.” She said she showed she had €3,000 in a bank account and an onward flight to Liverpool booked. She says she was held in the Dóchas centre for 15 hours. “They took me to the plane, treat me like a criminal.”

A Garda spokesman confirmed frontline immigration control at Dublin airport’s Terminal 1 was civilianised and handed over to the Border Management Unit (BMU) of the Irish Naturalisation and Immigration Service in June 2015.

The family with whom Ms Silva-Carvalho had come to say in Co Galway has urged the authorities to give a more detailed explanation for the reasons behind her detention.

Karin Muller-Wieland asked why Ms Silva-Carvalho was taken to Dochas prison when “there appears to be other centres for detention closer to the airport such as garda stations where she at least would have had legal representation?”

Ms Muller-Wieland said: “Whilst we agree that strict boarder controls are crucial in the governing of any country, this kind of ambiguity when assessing entry eligibility seems completely misplaced and causes extreme upset, damages the international image of Ireland and places extreme financial burdens on the traveling party who may be actively contributing to our economy through tourism...

“The psychological impact of what happened to Paloma and seems is happening to many other Brazilians and non-nationals cannot be underestimated.”