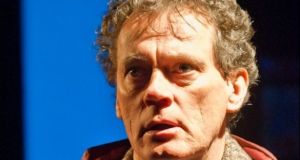 Andy Hinds: Men will be downgraded to the status of second class citizens. Photograph: Facebook

Efforts to ratify a European convention on domestic violence must be resisted as part of a “highly biased and harmful narrative” in Ireland that places women above men, a conference on Saturday heard.

Last year, Ireland signed the Council of Europe Convention on preventing and combating violence against women and domestic violence, commonly referred to as the Istanbul Convention, and set in motion steps toward its full ratification.

“Violence against women is a societal problem and the Istanbul Convention is an important instrument in tackling that problem,” she said.

However, on International Men’s Day on Saturday, the document was heavily criticised and dismissed as a symptom of a wider “narrative” imbalance in Ireland that placed women’s issues above those of men.

Speaking at the “Who Cares About Men?” event organised by Men’s Voices Ireland, Andy Hinds, a theatre director and writer, said plans for its ratification without any public discourse was a sign of enduring inequality.

“All this to me was the most glaring demonstration of how one highly biased and harmful narrative had taken hold of our country and of most societies in the west,” he said.

“This narrative is the one telling us there is something inherently wrong, dysfunctional that needs to be changed about being a man, about masculinity. That tells us it’s ok to say more or less any negative thing you want about men but it is not at all ok to say anything negative regarding women.”

This view is central to the founding of Men’s Voices Ireland, an organisation which emerged in 2014 to discuss, it said, “matters of urgent concern” for the male gender that receive little or no attention.

“In particular they were alarmed that steps were afoot to sign and ratify the Istanbul Convention without the slightest attempt to explain and discuss the document in any forum,” the group said in its biography.

“It was clear that the absence of a male advocacy group with a broad brief was a fundamental obstacle in making any progress and that legislation damaging to men could be railroaded through with no opposition.”

Mr Hinds told Saturday’s meeting of up to 50 people in Dublin that the Convention’s articles were skewed heavily toward female interests.

“And that any domestic violence perpetrated by women is so rare and minor that is can justifiably and completely be cut out of the conversation.

“If [the Convention] is ratified, I, all men here today, and all males in Ireland will be downgraded to the status of second class citizens.”

In September, Minister Fitzgerald told the Dáil that Ireland was fully supportive of the Convention and there was a commitment in the programme for partnership Government to implement it.

Work has commenced on implementing 18 legislative and administrative actions to enable this, she said.