Domestic violence calls rose by almost half during lockdown

Dearth of refuge capacity exacerbated by Covid-19 crisis, according to Women’s Aid 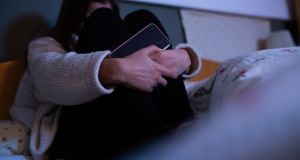 The Women’s Aid report reveals a 43 per cent increase in calls to its helpline, compared with the same period in 2019. Photograph: iStock

Calls from women experiencing domestic violence – including being strangled, raped and beaten – increased by almost half during the first three months of lockdown, compared with the same period last year, figures published on Thursday show.

At the same time, capacity in refuges decreased by 25 per cent to comply with social distancing requirements.

“Women disclosed high levels of emotional, physical, sexual and financial abuse from their partners, in some cases as a direct result of the lockdown introduced to stop the spread of the virus,” the report stated.

“Women told us that they had been strangled, raped and beaten by abusive partners as well as feeling constantly monitored in their homes.

“The mental health impacts of domestic abuse for women have also been heightened due to restrictions, with some women reporting suicidal thoughts.”

Garda figures cited show a 25 per cent increase in calls for help between April and May 2020 compared with last year. A total of 107 men were charged with domestic violence offences in the last two weeks of May.

Abuse could entail being beaten, having hair pulled, being burned, strangled or cut with knives. Women also said they were raped – sometimes while pregnant or after childbirth – coerced into sexual activity, and had intimate videos and photos taken and shared without consent.

Women also disclosed being threatened with violence, stalked physically and online, humiliated, isolated from friends and family. Women also said their children were abducted; they had property stolen or broken, and passports stolen; they were denied access to the family or their own income, and left with insufficient funds to feed children.

The dearth of refuge capacity, exacerbated by the Covid-19 crisis, is noted in the annual report which says last year the Women’s Aid helpline called refuges on behalf of women and children 171 times. On 84 occasions the refuges were full.

“According to the Council of Europe, Ireland only has one third of the recommended refuge space,” the report states.

The report is highly critical of the family courts, which it says often exacerbate women’s and children’s suffering.

“Custody and access arrangements ordered by the courts are often dangerous and/or detrimental to the safety and the well-being of children and their mothers and allows the abuse to continue.

“Children may be directly abused or neglected by the perpetrator during the time spent with them. Children are also emotionally abused when forced to witness the abuse of their mother during meetings to facilitate access and by the undermining of the relationship and bond with their mother,” says the report.

“In 2019, we heard 508 disclosures from mothers that their ex-partners were using access visits to abuse them, often in front of their children. It was disclosed on 102 occasions that children were being directly physically, emotionally and/or sexually abused during access visits with their fathers.”

Elke* has been in an abusive relationship since marrying her husband four years ago. Since the lockdown she has been taking care of their one-year-old daughter and working full-time from home. She is finding being confined to the house with her husband “a living nightmare”, she says.

“He makes me feel like a servant, demanding I cook, clean and have sex with him when and as he pleases. I’ve tried refusing, but he doesn’t listen and threatens to beat me so badly that no one would recognise me.

“He’s twice my size and I know the damage his fists have caused me in the past, so I feel like I’ve no other choice but to do whatever he asks. I’m terrified of him but I don’t know what to do or where to turn. None of my friends or family live in Ireland so I feel completely alone and isolated.

“I’m desperate to leave the relationship with my daughter but I’m scared of what my husband might do to us. I’d like to secure a safety or barring order against him but I’m scared I won’t be believed without solid proof.”

Women’s Aid are supporting her and helping her to apply for a safety order against her husband.

*The name has been changed.