Covid-19 restrictions: What do they mean for sport in Ireland?

Q&A: How will training work? Can parents watch kids’ matches? What about gyms? 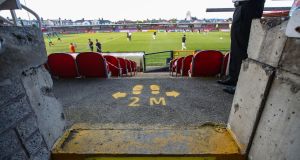 With virtually all sport at both grassroots and elite level now back up and running in Ireland, it came as a surprise to most organisations on Tuesday when the government announced tightened guidelines for sport around the country.

Here we take a look at what this will mean for sport in Ireland.

What are the main points?

From a supporter’s perspective the main headline from the announcement was that all sport must now take place behind closed doors. While that was already the case in a lot of sports, limited numbers of fans had been allowed in to GAA club championship matches and League of Ireland soccer matches as part of the 200-person limit which had previously been placed on outdoor gatherings. However, that will now not be the case until September 13th at the earliest with strictly no spectators allowed at matches.

On Wednesday the GAA announced that there will be a limit of 40 persons per team, to include “all players, management, coaches, ancillary backroom personnel and team officials”. These would be in addition “to essential match day personnel such as Match officials (referees, linesmen, umpires), media and event officials (stewards etc.)”

From a player’s perspective the main point of the new restrictions is that training sessions can now only be held with a maximum of 15 people, including coaches. In a statement released on Tuesday night the FAI said that all underage and adult activity will continue but that underage training groups must contain two adults and up to 13 children while for adult teams it will be one coach and up to 14 players with the same applying for the GAA.

In the new restrictions the government did clarify that “elite/professional sports and horseracing” are exempt from the 15 person limit. It’s not clear whether this covers the GAA club championships and the association are seeking clarification from the government.

But most team training sessions in any sport would have more than 15 people there?

They certainly would, especially with coaches included, so the restrictions state that teams can train with more than 15 people but they must be split into groups of 15 or less. This could present problems for a lot of teams, particularly underage, if they have, for instance, 16 players which would mean they would have to split into smaller groups with coaches supervising each.

NPHET letter to the Minister for Health

But 30 players together on a GAA pitch or 22 players on a soccer pitch during a match is okay?

Yes. Nphet were very clear in their advice to government that they believe sporting activities should continue but, outside of the actual match, contact should be limited as much as possible. As part of their advice they say players and coaches should keep their distance from each other before and after and during breaks in play while team huddles should also be avoided.

What about indoor sport?

The FAI have already said that all indoor football and Futsal will stop for the duration that the measures are in place while other indoor sporting bodies – such as Badminton Ireland – say they are checking with the government to see if they can continue play.

Basketball Ireland has described the restrictions as “confusing when viewed from a sports perspective”, and they are seeking clarification “in the next 24 to 48 hours”. In a statement on Wednesday they told clubs they should avoid organising training sessions of more than six people until clarification is received.

So why are limited numbers of fans not allowed in to stadiums anymore?

Well, this is the main issue taken up by the GAA on Tuesday night when they asked acting chief medical officer Ronan Glynn to “present the empirical evidence” that led to sporting activities needing to be curtailed. So far this evidence has not been published but professor Philip Nolan, chair of NPHET Irish Epidemiological Modelling Advisory Group, did tweet that he would be happy to explain the measures to the GAA which he says are primarily to “limit congregation and limit mixing between households. And save lives.”

In a letter written by Dr Glynn to Minister for Health Stephen Donnelly, the acting CMO says the National Public Health Emergency Team (NPHET) “expressed further concern in relation to a number of clusters that have emerged linked to sporting events.”

No further details of these clusters have been made available as of yet.

Does the restriction of no spectators apply across the board? Can parents watch their children play a match?

So far this is not clear. Going strictly by the restrictions published it would appear that parents would have to drop their children at their match – ideally without giving a lift to children from another family – and pick them up afterwards but they would not be allowed to stand on the sideline and watch.

This is one of the areas the GAA have asked the government to clarify and they have recommended that one parent or guardian be allowed attend juvenile matches, “where they consider it necessary for the welfare of their own child.”

The FAI say they will publish updated protocols at some stage on Wednesday. The Irish Times has also contacted the relevant government departments to seek clarity.

On Wednesday the Goling Union of Ireland (GUI) released updated protocols stating that all inter-club matches must be played with no spectators present with exceptions only in the case of one representative as team captain, the club captain or nominee, reserve players and one parent or guardian “in a safeguarding capacity for those aged 17 and under”.

What about summer camps?

With a few weeks still to go until the schools return, summer camps are still in full swing around the country. While the FAI are yet to clarify what will happen with their Summer Soccer Schools, GAA Cúl Camps are continuing with groups of a maximum of 15 people, including supervisors, in designated parts of the playing area.