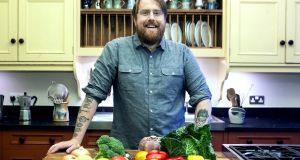 JP McMahon says that just one of his three Galway restaurants is financially viable at present. Photograph: Fusionshooters

The Michelin-star Aniar restaurant in Galway will remain closed until at least next March, its owner, JP McMahon, has said. This is due to the impact of current restrictions imposed by the Government on the operation of restaurants amid spikes in the spread of coronavirus.

“We have ultimately decided not to open until March 31st, 2021; that’s the official date I’ve given to Michelin. Whether that changes I don’t know yet,” he told Inside Business, a podcast from The Irish Times.

Mr McMahon, a columnist with The Irish Times, has reopened his other two restaurants – Cava Bodega and Tartare Cafe & Wine Bar. “We’re probably about 10 or 15 per cent down in Cava,” he said.

“Tartare was different because it was only 24 or 28 seats and we’ve lost nearly 50 per cent of the cafe/wine bar so it’s a little difficult. If the wage subsidy was to stop, Tartare would be instantly unviable.”

Mr McMahon said business remained “precarious” with the possibility that further restrictions or protocols could be introduced. “We have given ourselves until next May to make a decision [on the viability of the three restaurants. The worst-case scenario is that we end up with just Cava because it’s the only one at the moment that’s financially viable.”

Meanwhile, Des O’Dowd told the podcast that his Inchydoney Island Lodge and Spa resort lost about 50 to 60 bed nights from people living in Kildare, Laois and Offaly who were forced to cancel their holidays when the Government introduced lockdown measures in the counties last week.

“We’ve had guests [from those counties] who’ve had to cancel coming here and we’d feel very sorry for them,” he said.

Mr O’Dowd said over-70s had also started to cancel bookings following the advisory from Government on Tuesday for them not to stay in hotels due to the recent spike in the virus infection rate. “We’ve had a couple of cancellations from people over 70 . . . they’re a bit nervous about travelling.”

However, Mr O’Dowd said Inchydoney had enjoyed occupancy levels of 95 per cent in July and August. “Occupancy has been very good. Obviously, we’re missing some revenue from the spa and from weddings and from reduced capacity but we’re just happy to be open and trading.”

Separately, Mary McKenna, owner and managing director of Tour America, plans to keep her shops closed until January. “Right now, there’s very little business coming in the door. Our industry of all industries have been hit the hardest. For 2021 we’re getting a trickle in.”

Ms McKenna is positive about the prospects for next year. “This will end . . . and I’d say hopefully some travel by Christmas time and . . . people booking in January and travelling at Easter. If it went on another year, I would have problems. There’s [only] a certain amount we can keep bleeding.”

1 Anti-alcohol zeal of public health experts peppers reopening debate
2 Admission of mistake in Oxford vaccine dose raises doubts over reliability
3 Promontoria barred from pursuing doctor over Ulster Bank loan
4 Move to EU or face disruption, City of London is warned
5 ‘I don’t need to do any of this. . .I don’t actually need to work.’
6 A tale of two pandemics for Smurfit Kappa and Greencore
7 ‘Make plans but don’t hold on to them too seriously’
8 Online shoppers face unwelcome tax surprise
9 AIB revives €1bn-plus problem mortgages sale
10 Cliff Taylor: Deal or no deal we are now heading for a hard Brexit
Real news has value SUBSCRIBE