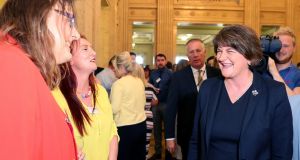 Arlene Foster urged members of the LGBT community to respect her right to oppose same-sex marriage as she became the first DUP leader to attend one of their events.

Ms Foster said she did not define anyone by their sexuality as she spoke at the PinkNews reception at Stormont.

Her appearance was the latest in a series of recent outreach initiatives by Ms Foster.

The DUP has been heavily criticised by LGBT activists for past derogatory comments about gay people and its ongoing resistance to same sex marriage in Northern Ireland.

“Just because we disagree on marriage does not mean that I don’t value the LGBT community,” Ms Foster said. “It is not a zero-sum game. All I ask in return is that my, and our views, are also respected if not agreed with.”

Some people clapped Ms Foster’s speech at Parliament Buildings but many in the Great Hall declined to applaud when she concluded her remarks.

A majority of MLAs backed the introduction of same-sex marriage the last time it was debated on the floor of the Assembly before the institutions collapsed almost 18 months ago, but the use of the petition of concern (PoC) by the DUP rendered that irrelevant.

The petition, which is a peace process construct designed to protect minority views in a post-conflict society, means a proposal can only be passed in the Assembly if a majority of unionists and a majority of nationalist MLAs support it, rather than a straightforward majority head count.

While the DUP does not have the electoral strength to deploy a petition on its own – 30 MLA signatures are required – it could join forces with other social conservative members to trigger one again if powersharing is restored.

While Ms Foster did not address the issue of the petition of concern during her speech, other speakers, including SDLP leader Colum Eastwood, demanded a reform of the mechanism.

The moves come amid the political impasse at Stormont and accusations from Sinn Féin that the DUP does not respect certain sections of society in Northern Ireland.

Ms Foster told the gathering at Stormont: “I wanted to acknowledge the contribution of the LGBT community in Northern Ireland and to recognise the reality of diversity among our citizens.

“I wanted to recognise that some of our brightest and best in this country are part of the LGBT community.

“I wanted to send a clear message from this event, that we are all someone’s child and we are all a valued part of this wonderful place we call home.”

During her speech at the reception on Thursday evening, Ms Foster said she was determined to attend, despite the fact it marked the 30th anniversary of an IRA bomb attack on her school bus in Fermanagh.

She made the point that the emergency services who attended the scene treated everyone as equals.

“Ladies and gentlemen, this evening, I look out on this gathering and I don’t define anyone on the basis of their religion, race or sexuality,” she said.

“I look at you as my neighbours or my fellow citizens. It should not only be in our worst moments, such as the bus bomb, that we are reminded that we are all equal.”

Ms Foster said she understood the interest in her attendance.

“But from my perspective – I look forward to a time when such attendance will be unremarkable,” she added.

The DUP leader continued: “I wanted to use this platform to encourage meaningful engagement rather than megaphone diplomacy.

“As a mature democracy, we must all enter into a new spirit of respectfulness and understand that we will not always agree but we will always try to treat each other with good manners and grace.

“For my part, I believe I can hold to my principled position, particularly in relation to the definition of marriage, whilst respecting the diversity across our society.”

“And people of faith contribute in many different ways to society here including to our business community, they should be free to do so without having to abandon their faith,” she added. “We need to be in a space where we accept each other for who we are and we respect people’s conscientious position.

“Sexuality is for each individual. The value of each of us should not be based on whether we are heterosexual or homosexual. Just as thirty years ago, all the children on that bus were equal so too is everyone in this Great Hall this evening.

She added: “Whilst we disagree, this does not prevent us from finding common values to keep Northern Ireland moving forward.

“My party was founded in 1971 on the principle that everyone is equal under the law and equally subject to the law. If we truly believe in equality of opportunity for all in Northern Ireland, then we must respectfully engage and listen to each other’s viewpoints.”

Ahead of the speech, Ms Foster mingled and chatted with fellow guests. She posed for photos and laughed as attendees shook her hand.