Crèches will be ‘monitored’ over abuse of childcare subsidy 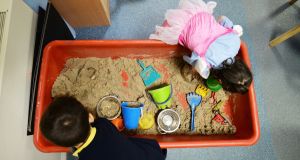 Parents of children in registered childcare providers will have up to €80 a month knocked off their bills under the Affordable Childcare scheme which takes effect on Friday.

The new scheme was introduced in last October’s Budget to provide financial support to parents with children aged between six months and three years.

After this age, children are entitled to a free year of early childhood care and education under the ECCE scheme.

The new subsidy is paid directly to the childcare provider, and concerns have been raised that some operators will choose to increase their fees rather than pass on the full saving to parents.

Minister for Children Katherine Zappone called on crèche providers to show restraint if they felt the “need to increase their fees”.

She warned that any indication of patterns where fees were being unreasonably increased would mean that she would have to take action, which included considering regulations or price caps.

Ms Zappone said that evidence from both Early Childhood Ireland and her department’s own preliminary analysis showed that a certain number of crèches could increase fees by up to 6 per cent.

Parents of 70,000 children are expected to avail of the new scheme in the coming months through a universal subsidy of up to €80 a month or €1,040 a year, which is boosted by an extra extra means-tested payment for low-income households.

Speaking to RTÉ’s Morning Ireland, Ms Zappone said: “If we have a lot of childcare providers increasing fees significantly for parents, this weakens my hand as I go to the negotiating table in the next couple of weeks to get more money.”

She called on childcare providers to cooperate with parents in order to ensure the success of the initial steps of the scheme.

Ms Zappone encouraged parents to check if they were eligible to subsidies on affordablechildcare.ie.

Commenting about recent concerns over the collection of data by state agencies under the public services card project, Ms Zappone said she didn’t think data protection experts were “necessarily all wrong” in the concern they had raised.

“I have read what the Data Commissioner has said and, again, I think Government needs to listen to that and to go back and examine the proposed legislation in that regard and take it from there,” she said.

1 Bus Éireann to shut many inter-city routes due to financial pressures
2 Coronavirus cases rise in most counties but rate of increase is slowing
3 Hello Eir, is anybody there? Four unhappy customers complain
4 Donald Trump's taxes: US president paid $750 federal income tax the year he won the election
5 More than 30 people queue overnight to secure property in Carlow
Real news has value SUBSCRIBE