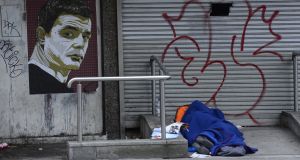 It also found that the lack of access to housing forced many of the young people into situations of ‘hidden’ homelessness. File Photograph: Cyril Byrne/The Irish Times

Only a quarter of homeless young people tracked over a two year period under an academic study found stable accommodation at the end of that period.

Five homeless charities have warned of a deepening youth homelessness crisis in Ireland with the number of 18-24 year olds increasing by 78 per cent over the last three years.

Government figures have reported that 793 young people were homeless and in emergency accommodation in the week of April 4th-30th 2017. This represented a 82 per cent increase from 436, the earliest figure available (April 2014).

The longitudinal study followed 40 young people over 24 months in order to examine the factors, experiences and circumstances that impact on their homeless and housing situations over time.

Lack of access to affordable housing was one of the key reasons the young people remained trapped in homelessness.

The approach involved re-interviewing the young people and their family members and it found that just 24 per cent of the young people were in housing after the two-year period, while 76 per cent were either homeless or living in insecure accommodation.

It also found that the lack of access to housing forced many of the young people into situations of “hidden” homelessness. This saw them “sofa surfing” in the homes of family members, friends and acquaintances.

The “Living in Limbo - Homeless Young People’s Paths to Housing” study was carried out by Dr Paula Mayock and Sarah Parker of the School of Social Work and Social Policy at Trinity College Dublin and is being launched there by former president Mary McAleese on Monday morning.

Among those in attendance at the launch will be representatives of Focus Ireland, Simon Communities of Ireland, Threshold, Peter McVerry Trust and Society of St Vincent De Paul, which together funded the study.

On behalf of the five charities involved, Mike Allen of Focus Ireland said that it was “a highly important piece of research” as it “clearly indicates there are very targeted measures that can - and must - be put in place to prevent more young people becoming homeless next month, next year and in coming years.

“It also demonstrates the impact that homeless organisations can have when we work together to take on major projects such as this”.

Overall, young people aged 18-24 make up just over 10 per cent of the record number of 7,680 people currently homeless in Ireland.