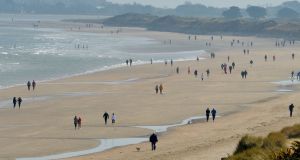 Social distancing being maintained at Portmarnock Beach due to Covid-19. Photograph: Alan Betson

Mounting concerns by authorities that people may shrug off coronavirus travel restrictions this bank holiday weekend have prompted renewed appeals to stay at home.

Taoiseach Leo Varadkar led the way on Tuesday with a direct appeal to people not to visit holiday homes or caravan parks over Easter.

“The spread of the virus is slowing but people travelling could give it a boost - spreading it and seeding it in areas unaffected so far,” he said. “Stay at home and #flattenthecurve.”

As efforts continue to ensure the rate of increase in infections is brought under further control, there are fears any significant population movement over a normally hectic holiday could undo much of the progress.

It was a sentiment underlined by Minister of State for Community Development Michael Ring who said he had received “lots and lots” of calls from concerned people in his Mayo constituency, many fearful of the virus being imported from other parts of the country.

In an interview on RTE radio, Mr Ring noted it is the biggest week of the year for tourism in the west of Ireland.

“We have always had thousands of visitors coming into the county particularly for Easter but we are asking people now: look it, you have to stay at home. This is not fair on people that are living in their own residence, staying in their own county, doing what they are asked to do by the Government.”

On Tuesday too, the National Public Health Emergency Team (NPHET) made a direct appeal to the public not to travel unnecessarily.

Echoing the social media post of Mr Varadkar, it said it was concerned a proportion of the population may seek to travel to various destinations for holiday homes and mobile homes over the weekend.

It said it was grateful gardai have been “visibly present” on the roads over the past week “assisting the public with compliance”.

Gardai have been operating increased patrols and checkpoints to assess whether movements and travel by members of the public is essential.

It is almost inevitable that will be stepped up this weekend and, as with any bank holiday, gardai are likely to issue a statement setting out its roads policing priorities in the days ahead.

Actions could also be taken at a local level to make normally thriving locations less appealing.

Wexford County Council said it would close White Gap Car Park at Curracloe Beach, adding to the Ballinesker and Culleton’s Gap car parks “in order to comply with social distancing”.

“An Garda Siochana will be carrying out strict enforcement in relation to parking and non-compliances in this regard,” it said in a statement designed to deter bank holiday weekend visitors.

“The Council must act in the interest of public health due to gathering crowds and infringements of social distancing requirements.”