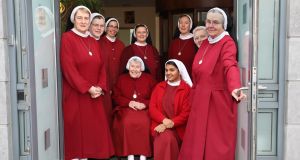 Redemptoristine nuns at their Monastery of St Alphonsus in Drumcondra. The nuns are video-streaming mass from the monastery to counter the Covid-19 movement restrictions. Photograph by Crispin Rodwell

The Redemptoristine Sisters are used to social distancing: members of the enclosed Catholic order remain inside their north Dublin monastery except for essential or medical matters.

Ironically, the coronavirus pandemic has brought them closer to the public.

Since the Covid-19 outbreak closed churches and other places of worship, there has been a surge in viewership of their daily Masses – broadcast via webcam from their community at St Alphonsus’ Road Upper in Drumcondra.

According to Church Services TV, through which they broadcast, 3,000 people now watch the nuns’ daily Mass at 5.45pm from their chapel.

The nuns, who livestream their Masses on a webcam at rednuns.com, have also reported an increase in emails and texts from viewers around the world appealing for prayers.

Prioress at their monastery, Offaly woman Sr Lucy said “we’ve been broadcasting Mass by webcam for about 10 years now... We have viewers in China, Afghanistan, New Zealand, Australia. There are 200 countries in the world and I’d say we have viewers in most of those. We even had one in Siberia, a Redemporist who is back in Ireland now.” Most viewers are in England, she adds.

The Mass is said by chaplain Fr Pat O’Donoghue who is always “full of compassion, hope and encouragement at this time of crisis,” said Sr Lucy. It is attended by members of the community, respecting social distancing requirements.

Government regulations mean “everyone is a contemplative at the moment, which may be a problem for most people but it is easy for us”, said Sr Lucy, who likes to read murder mysteries in less prayerful moments.

‘A lot of silence’

Being a contemplative order they remain inside the monastery except for in exceptional circumstances. There are 14 sisters in the community and their day begins at 6.30am. Most of their day, up to 10pm, is spent in silence and prayer.

“There is a lot of silence,” said Sr Lucy, “in the cloisters and the enclosed garden which, now in spring, lets you know that there is a God when you see the beauty of nature all around.”

The sisters and a staff of six make altar breads for Communion used in churches all over Ireland and some in the UK. Their principal source of income, this stalled completely “about 10 to 14 days ago” when public Masses were stopped. They make about 25 million altar breads a year.

Usually TV, radio, newspapers and the internet are not a part of their lives but since the coronavirus outbreak, Sr Lucy and Sr Gabrielle have been watching the RTÉ News each night. After which, from 10pm, there is “the great silence” which continues until they rise the following morning.