Cigarettes cause of a quarter of fatal fires

One third of all fatal house fires start in the bedroom, often from a cigarette

Smoking in bed was highlighted as a particular risk. Photograph: Haydn West/PA

A disproportionately high percentage of pensioners die in house fires in the State, according to a review of a decade of statistics on fire fatalities.

About 35 per cent of victims were aged 65 or over, despite this group making up just 12 per cent of the population.

A total of 326 fatal fires were recorded in 10 years involving 366 victims. The statistics, provided by the fire services across the country, are published by the Department of the Environment.

Matches, candles and chip pan fires were the next most likely causes of fire fatalities during the time. Four people died after falling into an open fire, one of whom was a man thought to have had a heart attack beforehand. Self-immolation using petrol was recorded in one fatality which occurred in 2013.

Fires were most likely to originate in a bedroom, the seat of almost a third of all fatal fires in the past 10 years. Smoking in bed appeared to be the most likely cause in such instances: in 40 per cent of cases where a suspected cause was recorded cigarettes were reported.

Over a quarter of fatal fires started in the livingroom. 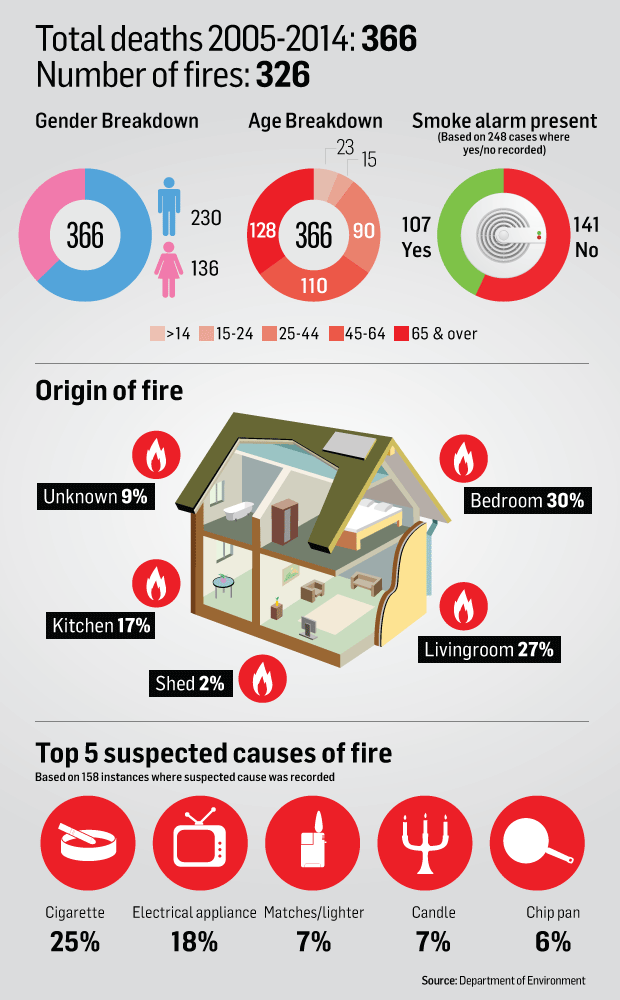 Excluding instances where the source of the fire was unknown or recorded as being under investigation, 25 per cent of livingroom fires were suspected to be due to cigarettes, with chimney or open fires accounting for 15 per cent.

Kitchens were the next most likely point of origin for fires with chip pans accounting for the highest cause of fires emanating from this room.

Nine fatal incidents involved car fires; two were recorded as being caused when the fuel tank ignited on impact. The highest number of fatal fires occurred in January, followed by December with more than a quarter occurring in these two months.

Causes of death were not related to the fire in all instances. The highest number of fatalities recorded in the 10-year period covered was a house fire in which the bodies of four people were discovered by a branch of the Wexford fire service on April 26th 2008.

This record refers to the deaths of Diarmuid Flood, his wife Lorraine (38) and their two children Mark (6) and Julie (5). However, it was later found that the fire had not caused the deaths. In 2009 a coroner’s court jury returned verdicts of unlawful killing in the deaths of Lorraine and the two children, and a verdict of suicide in the death of the children’s 41-year-old father.

Of the 366 fatalities recorded between 2005 and 2014, people aged 65 or over accounted for 128 fire-related deaths, despite being almost as likely as the general population to have a fire alarm installed in their home.

Where fire brigades were able to ascertain whether there was a fire alarm on the premises, they recorded that no alarm had been installed in 57 per cent of cases. This figure was marginally higher for those in the 65-plus age category at 58 per cent.

In 20 cases a fire alarm was present but not operational or installed incorrectly and seven of these cases involved fatalities of people in the over-65 age category.

Electrical appliances – including a fan heater and electric cooking device – were the most common suspected causes of fire leading to the death of people in the over-65 category followed by cigarettes, open fires and electrical wiring.

Eamon Timmins of Age Action said the statistics should act as a wake-up call for older people and their families.

He encouraged older people, their relatives and friends to be vigilant in replacing old and faulty electrical devices and to address “bad habits” such as drying clothes in front of open fires or covering electric heaters.

Mr Timmins also encouraged those visiting older people to change batteries in their smoke alarms, a task he noted that was difficult for many older people. Men were more likely to die as a result of fire than women, with males accounting for 63 per cent of victims in the past decade.

‘About 450,000’ people to get second AstraZeneca vaccine in coming five weeks 20:00
‘Differences should be celebrated’: Chu gives speech at anti-racism rally 19:23
DUP party officers move to conclude swift election of new leader 18:22
Varadkar tells party there must be a positive legacy to the pandemic 17:51
North’s parties can work together to resolve political impasse – Taoiseach 17:48

3 ‘Differences should be celebrated’: Chu gives speech at anti-racism rally

Thinking Anew – The safe option is not always what we need