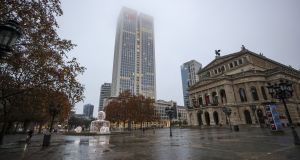 The UBS Group AG European Opera Tower (OpernTurm) skyscraper in Frankfurt, Germany. Germany reported a record 962 coronavirus deaths in the 24 hours through Wednesday morning, the highest since the start of the pandemic. Photographer: Alex Kraus/Boomberg

Germany’s Covid-19 death rate hit a new high of 962 cases on Wednesday as a crematorium sounded the alarm over its growing backlog of bodies.

The eastern city of Zittau and the surrounding regions in the state of Saxony are currently Germany’s virus hotspot with an infection rate of nearly 500 per 100,000 of population – 10 times the target ceiling Germany has set.

Zittau officials say they have seen an 88 per cent rise in the death rate compared to this time last year. With 115 deaths so far in December, compared to 45 a year ago, Zittau announced it was opening an additional storage facility for bodies.

“Despite optimised procedures and permanently working machines, the number of cremations necessary is higher than the capacity of the Zittau crematorium and its staff,” the city said in a statement.

Crematorium manager Daniel Brendler said the situation was “still manageable” but it was necessary to be prepared for all eventualities. Zittau mayor Thomas Zenker thanked crematorium staff for agreeing to work additional shifts.

“We have reached our organisational limit and ask all those affected for understanding,” he said.

Germany reported a record 962 coronavirus deaths in the 24 hours through Wednesday morning, the highest since the start of the pandemic, taking the number of deaths above 28,000.

Figures from the US-based Johns Hopkins University show active cases have jumped by 36,153, the second-biggest rise since the start of the pandemic. Germany’s Robert Koch Institute (RKI) for infectious diseases registered a national seven-day incidence rate of 195 per 100,000 – far exceeding the target ceiling of 50.

Germany has the fifth-highest tally of coronavirus infections in Europe, behind France, the UK, Italy, and Spain.

RKI officials expressed alarm on Tuesday that the first week of hard lockdown – closing everything but essential retail and services – had yet to have any noticeable effect on numbers.

Reliable infection numbers may not be available over the holiday period, the RKI conceded on Wednesday. It collates numbers supplied by local health authorities across the country, most of which will not be operational on public holidays.

German police will be working over the holidays enforcing rules allowing a family invite in members of one other household, to a maximum of five visitors.

“We won’t be going from door-to-door,” said Jörg Radek, deputy head of the police union (GdP). “But if we get a tip-off that rules are being broken somewhere, then we will follow it up.”