Reading the messages left on RIP.ie helped me to grieve for my father from afar 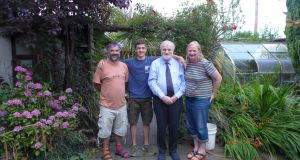 Nora Dempsey with her dad Jim Dempsey, partner and son

Nora Dempsey is from Enniscorthy, Co Wexford. She studied experimental physics at Trinity College in 1998 and then did a PhD there. In Grenoble she did her post-doctoral research on magnets. Her father Jim died last month, but because of Covid-19 restrictions, she was unable to attend his funeral.

Grenoble has been my home away from home since I arrived 22 years ago. The attraction of the place, beyond its great food and wine, is its great international character, thanks to its strong links with the study of science. Grenoble also has lots of hiking and skiing trails, being nestled between three mountain ranges.

I still have very strong ties to Ireland. I typically travel home two or three times a year and had planned to come back in April for the third anniversary of my mother’s death. Sad as I was to miss this because of Covid-19 travel restrictions, I wasn’t ready for the surreal experience of having to follow my father’s funeral and burial online, after he suddenly passed away at the end of April.

My father, who had Alzheimer’s and heart issues, had spent a few weeks in Wexford General Hospital after falling at home. After he was discharged from hospital he was moved to a nursing home as part of a convalescence plan.

Owing to the pandemic, he wasn’t allowed any visitors, though one of my sisters was able to see him very briefly the day before he was transferred from the hospital to the home. He was in good form and seemed to have turned a corner.

So it was a shock to get a call from one of my sisters telling me Dad had died of a heart attack, just nine days after settling into the nursing home. A consolation we had was that he died peacefully, in a nice environment, being cared for by very kind and professional staff members.

Having not been allowed to visit my dad during the last days of his life, my two sisters and two brothers, who live near, were at least able to see him laid out in his room the evening he died. Alas, this was not possible for me or another brother living in Berlin. That evening we missed the first important rite for our father.

Many calls with family members and close friends got us through that first cold shock. Not being able to fly home to Ireland added to the frustration of being under lockdown in Grenoble. Having respected the decree here in relation to taking exercise (a maximum one hour within a radius of 1 kilometre from your home) since lockdown started, the following morning I broke the rules to hike up the Bastille. This is a fortress that sits almost 300 metres above Grenoble, reached by a mix of dirt paths and steps through woods, ramparts and tunnels. Hiking up this almost deserted landmark, listening to birdsong and glancing back at the city below, did me the world of good.

My family in Ireland arranged the death notice, removal and funeral services, together with the undertaker and parish priest. The website RIP.ie really took on a new importance for me during the Covid-19 crisis - indeed, it was the first time I had ever heard of or visited the site. Reading the messages left on the Condolence Book page helped me to grieve.

I learned about the man and not just the father that Jim Dempsey had been. Fr Michael Byrne, parish priest of Bree, is a tech-savvy priest who set up a live Facebook link to allow people to follow masses and services online since the beginning of the Covid-19 lockdown. Thanks to this, my brother and I, family members from as far away as Australia, as well as family and friends who were much closer but still forbidden from travelling, were able to attend my father’s funeral virtually. We followed the cortege to the graveside and the burial, thanks to a Zoom link set up by my brother in Berlin, and the improvised smartphone-filming of a niece.

Covid-19 robbed us of a traditional Irish funeral, as it did many other families. Not being there denied my brother and I the chance to say a proper goodbye. About a week after my father’s funeral, I woke up one morning asking myself if it had really happened.

I am looking forward to travelling back to Ireland when I can to visit my parents’ grave, to drop into the church where their funeral services took place and to raise a toast to them with friends and family.