US coronavirus cases surge as many states set weekly records 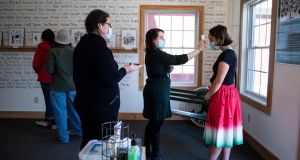 The number of new coronavirus cases in the United States is surging once again after growth slowed in late summer. While the geography of the pandemic is now shifting to the Midwest and to more rural areas, cases are trending upward in most states, many of which are setting weekly records for new cases.

Taken alone, case counts are an imperfect measure of the pandemic’s severity, and it is difficult to compare the current numbers with earlier points in the US outbreak when testing was less widespread. But other critical measures are showing a resurgence, too. And the continuing spread of cases to new areas of the country suggests the outbreak is far from over.

“We are headed in the wrong direction, and that’s reflected not only in the number of new cases but also in test positivity and the number of hospitalisations,” said Caitlin Rivers, an epidemiologist at Johns Hopkins University. “Together, I think these three indicators give a very clear picture that we are seeing increased transmission in communities across the country.”

The rise since mid-September has been especially profound in the Midwest and Mountain West, where hospitals are filling up and rural areas are seeing staggering outbreaks. The regions are home to almost all of the metro areas with the country’s worst outbreaks right now.

“We are starting from a much higher plateau than we were before the summer wave,” Ms Rivers said. “It concerns me that we might see even more cases during the next peak than we did during the summer.”

The average number of new coronavirus cases per day first peaked in mid-April, when New York City and its surrounding areas were hit hard. New Orleans, southwest Georgia and some resort towns in the west also saw some of the spring’s worst outbreaks.

Over the summer, the number of new cases per day soared past the April peak. The south and west were particularly affected. Cases remained high after the July surge, and they continue to rise in parts of the south, including Alabama, Arkansas, Mississippi and Tennessee. In the northeast, the number of new cases stayed remarkably flat over the summer. But numbers in New York, New Jersey and Massachusetts, while still low, have been rising over the past couple weeks.

The current resurgence is also particularly rural compared with earlier stages of the outbreak, which hit cities in the northeast and then the sun belt. Of the 100 counties with the worst per-capita outbreaks in the last seven days, more than half are home to fewer than 10,000 people. Almost all have populations under 50,000.

There are reasons for optimism, Ms Rivers said, like increased testing capacity and better knowledge about effective treatments and containment measures. But, she said, several factors keep her concerned about the current rise. Ms Rivers pointed to the start of flu season, the continued politicisation of control measures like mask mandates and cold temperatures that would force people indoors, where the virus thrives.

“I think we are in a dangerous place,” Rivers said. – New York Times