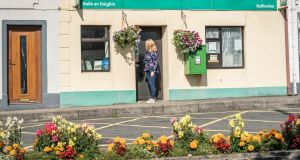 Ann Gilmore closes the door for on the last day of business at the Post Office in Ballindine, Co Mayo. Photograph: Keith Heneghan

The chief executive of An Post has said he is not attacking rural Ireland but is ensuring the viability of the company.

“What we are doing is the opposite of an attack. What we’re putting in place is a plan and a strategy to ensure there is an excellent service for the years ahead,” David McRedmond told RTE’s Morning Ireland.

He was responding to criticism after An Post yesterday announced the locations of 159 post offices which are set to close in the coming weeks and months as part of a restructuring plan.

The greatest number of closures will be in Galway (18), followed by Donegal (17), Cork and Kerry (both 12), and Mayo and Wexford (both 11). Post offices in 25 of the State’s 26 counties will close as part of the plan, with Dublin being the exception.

Sixteen of the post offices have already shut, with the rest to close over the next four months.

Mr McRedmond called for more Government services to be operated through post offices such as motor tax. “We would love to get more government services, that’s why the harp is above the door.

“We’re doing everything to improve the service. If we don’t plan it, it will die.”

He pointed out that of the 159 post offices due to close before the end of the year, only ten are at a distance of more than 10km from another post office while 100 are in areas described by the CSO as having “no settlement.”

Mr McRedmond also said that 96 per cent of customers affected by the closures will have better post office services, while 3.7 per cent will be impacted.

“We are doing everything we can to ensure that rural communities are well served.

“We know every community that we live in, we really care about this. We’re doing everything to improve the service.”

He said An Post expects to see more customers in other post offices close to the 159 that will close. This will make them more viable, he added. “We will work with these communities.”

Mr McRedmond said that An Post will announce the opening of five new post offices around the country later this week, which he said emphasises the company’s commitment to its customers.

There has been much reaction in rural communities to the announcement. The closure of rural post offices is going to have a huge impact on local communities said the chairman of Forum Connemara, Terry Kennan, who is also Vice Chair of Irish Local Development network.

“It’s going to have a huge effect because there’s a lot of post office closing in our area here in north west Connemara .

“It seems to be an attack on rural Ireland, it seems that people no longer matter, there’s no empathy with people, that it is all about facts and figures, a numbers game, numbers crunching,” he told RTE’s Morning Ireland.

“In my own area the post office closed 15 years ago and people moved to Cornamona which is about six miles away, now they find it’s closing and people are being moved to Clonbur, which makes it a 19km journey.

“Cloughbrack is closing also, that’s two Gaeltacht post offices. People in these areas would be fluent in Irish, they’re being forced now to go outside their normal area to areas where there wouldn’t be facilities for reading and understanding documents in Irish.

“We have on the one side grants now for doing up rural villages and towns coming from one side and at the same time our post offices are closing.

“The community is what makes a village, if your community is dying and the people are leaving the village, they’re lonely, if you’ve a dying village it doesn’t matter how good it looks, there is no vibrancy, it’s dead. That’s what’s happening.

“They help them with their car tax form, if a husband or wife died and they’re no longer entitled to a pension, the post master, post mistress knew that, they filled them in, they helped them to get all the information out to the department.

“Who’s going to notify the authorities that your partner has died?,” he said

The closure of 159 post offices is “nothing short of a direct attack on rural Ireland”, Fianna Fáil’s Communications spokesman Timmy Dooley has said.

“There is no doubt among the people living in the communities directly affected, that these closures send a very message that the State no longer sees rural Ireland as a viable place to live or work and will not be supported to settle there,” Mr Dooley said in a statement.

He said post offices should receive support from the exchequer to ensure public services are rolled out to all communities .

“I understand An Post needs to be viable, but it shouldn’t be just profit and loss,” he told RTE’s Morning Ireland.

“Of course it’s not a charity. It has to be in a position to offer equivalence of service.

“Support from central exchequer is needed to ensure public services are rolled out.”

Mr Dooley defended the closure of post offices when Fianna Fáil had been in government, pointing out such closures had been in “really remote areas” and in circumstances where contracts were offered, but were not taken up. They were “natural reductions,” he said.

An Post has said that more than 100 of the post offices due to be shuttered are in remote areas. Alongside the closures, it intends to open five new post offices, and fill vacant postmaster contracts at 36 urban and rural locations.

An Post has committed as part of the reformed network that communities with populations of over 500 people would have a post office, and 95 per cent of the population would always be within 15km of at least one post office.

Several of the post offices to be closed were more than 10km from the next nearest office. In Swanlinbar Co Cavan, where the post office is to close, the nearest alternative is 14.6km away, in Ballyconnell.

Minister for Communications Denis Naughten said all closures were made on a voluntary basis. The recent restructuring represented a “necessary first step in reinvigorating our national post office network and making it a viable, sustainable and modern network for the future”, he said.

The Irish Postmasters’ Union (IPU) and An Post had been involved in protracted talks over restructuring plans for the postal network.

In May, the IPU passed a ballot to support a new plan for the post office network, with the support of 80 per cent of members. The plan had been agreed with the union’s executive and An Post, and was approved by the membership on May 11th.

Some 161 postmasters applied for a voluntary retirement package under the plan, with An Post approving 159 of these. Their customers will be transferred to alternative post offices nearby.

Debbie Byrne, managing director of An Post’s retail division said the company was “very grateful” for the years of work from the postmasters who were retiring.

“The An Post team has done painstaking work combining business and demographic data with extensive local knowledge to produce a network plan which actively supports the future of rural Ireland,” she said.

“We fully acknowledge that this process will be difficult for some customers and communities but the end result will be a strengthened, viable post office network serving the needs of our country for the future,’’ she said.

In areas where post offices will be closing, local shops will provide some services such as stamps, bill payments, mobile-top ups and television licence renewal through a PostPoint counter facility, the company said.