Abortion legislation could be delayed by further appeal 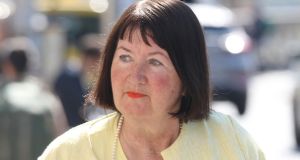 Joanna Jordan has until Friday to consider a further appeal to the Supreme Court. Photograph: Collins Courts

Preparations to introduce abortion legislation and set up abortion services are continuing in the Department of Health while officials await a Friday deadline for a Supreme Court appeal against the result of the referendum to be lodged.

On Monday, in a strongly worded judgment, the Court of Appeal upheld a High Court decision earlier this summer which dismissed a challenge to the result of the abortion referendum.

The challenge was taken by Dublin woman Joanna Jordan, who alleged a series of irregularities in the conduct of the referendum and the registration of voters, as well as complaining about the campaigning by the Taoiseach and Government Ministers.

The Court of Appeal dismissed the claims, describing them as a “frustration of the democratic process”.

However, the referendum result which would amend the Constitution by removing the ban on abortion cannot be finalised until Friday at least, as the court allowed Ms Jordan until then to consider a further appeal to the Supreme Court.

But even if the Supreme Court hears an appeal, legal and political sources say there is little chance of success. However, it could delay the process further.

Once the legal process is completed, the result is certified and the President can then sign the referendum bill, triggering the amendment of the constitution as endorsed by voters in May. Only then can legislation be introduced to the Oireachtas.

The Minister for Health, Simon Harris, will not accept any substantive amendments to the legislation

But Government sources say that work is continuing to prepare for the introduction of the legislation when the Dáil returns in late September and the subsequent introduction of abortion services.

The Government hopes that the legislation – which will provide for abortion to be legal in all circumstances up to 12 weeks and in specified cases thereafter – will be through the Houses of the Oireachtas and signed into law by the President by the end of October. It is understood that the Minister for Health, Simon Harris, will not accept any substantive amendments to the legislation. The Government then intends to have abortion services available by the beginning of next year.

Abortion pills will be prescribed by general practitioners in early pregnancy, while for abortions later in pregnancy, services are expected to be provided in maternity hospitals.

However, one source familiar with the discussions said that abortion pills are likely to be licensed up to nine weeks, as there may be a need for scans to determine foetal age after that period.