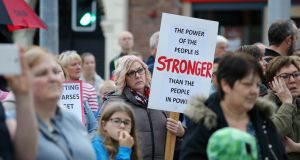 Members of the public take part in the ‘We Deserve Better’ Rally in the centre of Portadown, Co Armagh. Photograph: Kelvin Boyes/Press Eye.

The demonstrations were held to mark Northern Ireland reaching 589 days without a fully functioning administration, matching a record set in Belgium between April 2010 and December 2011.

The Northern Ireland Executive collapsed on January 9th of last year when the late Sinn Féin politician Martin McGuinness stood down as deputy first minister amid furore over a botched renewable energy scheme.

The continuing political impasse led to the recent creation of the #WeDeserveBetter social media campaign calling on the DUP and Sinn Féin to restore an administration at Stormont.

A demonstration was to be staged outside Belfast City Hall but it was cancelled due to the fire at the Primark store on Royal Avenue, about 100m from City Hall. Nonetheless, up to 100 people, unaware of the decision, assembled outside City Hall.

Les Hume, of the Belfast Chamber of Commerce, who runs a musical instrument shop on Royal Avenue, said that without a powersharing administration Northern Ireland was “voiceless” in the face of Brexit and other problems.

In advance of the rallies, a spokeswoman for Northern Ireland secretary Karen Bradley said she was aware of the public frustration and shared the “firm view that the current situation cannot be allowed to continue”.

The spokeswoman said Ms Bradley was “working on options to ensure the good governance of Norther n Ireland”.

However, the indications were that these demonstrations are unlikely to have any imminent impact in persuading either the DUP or Sinn Féin to find common ground over matters such as the Irish language and same sex marriage.

DUP leader Arlene Foster was joined on Tuesday by party Assembly members and MPs at Parliament Buildings, Stormont to unveil a banner declaring “Sinn Féin End Your Boycott!” She said the powersharing institutions “should not be held prisoner” by Sinn Féin.

Sinn Féin’s Northern leader Michelle O’Neill said the political institutions would only enjoy public confidence if they were based on the principles of the Belfast Agreement of “mutual respect and parity of esteem and have integrity at their heart”.

“We had an agreement in February which paved the way for the re-establishment of the Executive, but the DUP reneged on this agreement and collapsed the political talks,” she said.

“The Tory government’s response, with the full support of the DUP, has been to adopt a do-nothing approach to restoring power sharing.

“The British government continues to facilitate the DUP’s disgraceful denial of rights enjoyed by citizens everywhere else on these islands, language rights, marriage rights, women’s rights and the right to a coroner’s inquest,” she said.

Ulster Unionist Party leader Robin Swann said: “Sinn Féin blame the DUP, the DUP blame Sinn Féin. Instead of political stunts, the parties should be around a talks table getting down to brass tacks and attempting to get a reformed, functioning Assembly and Executive back in place.”

Traditional Unionist Voice leader Jim Allister said “foolishly calling for the return of failure, rather than demanding the root and branch change necessary to enable Stormont to work, is empty headed”.