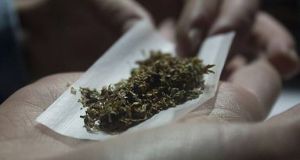 The Citywide Drugs Crisis campaign, which supports the decriminalisation of drugs possession for personal use, wants the public to make submissions to the Department of Health on the issue. Photograph: Getty Images

The Citywide Drugs Crisis campaign, which supports the decriminalisation of drugs possession for personal use, wants the public to make submissions to the Department of Health on the issue.

A working group established by the department to examine the issues has had so many submissions it has decided to extend the deadline for further submissions to July 13th.

Anna Quigley, co-ordinator of Citywide, said of the 16,960 drugs offences recorded by the Central Statistics Office last year, 12,211 were possession for personal use.

“This figure represents 72 per cent of all drugs offences for that year. Significant State resources are tied up in dealing with such offences, including police time, legal fees, court time and that of the DPP’s office.

“Most people would agree that this money and time could be put to better use in providing health and social services to those using drugs, and following up serious criminal gangs who are engaging in violence and intimidation.

“A change in the law will also be a step in reducing the criminalisation and stigmatisation of our most disadvantaged communities and addressing the serious economic and social issues that lead to the devastating impact of drug-use and the drugs trade,” said Ms Quigley.

“The evidence shows that our current approach of criminalising people for possession of drugs does not reduce the overall levels of drug-use in society. What it does do is increase the difficulties and challenges for a person trying to address their drug-use.”

Decriminalisation would mean a person found in possession of drugs for personal use would no longer be treated as a criminal and would instead be referred to health and social services.

“This is not the same as legalisation as the drugs trade remains illegal and subject to all of the criminal laws that currently apply, and no drug that is currently illegal will be made legal,” said Ms Quigley.

The department’s working group was established under the auspices of the national drug strategy Reducing Harm, Supporting Recovery to examine alternative approaches for the possession of illegal drugs for personal use.