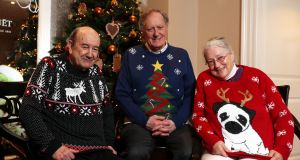 Vincent Browne at the launch of Alone’s Christmas Campaign in Dublin with Donald Smith and Annette Egan, who avail of Alone services

The number of isolated and lonely older people seeking support has risen by 40 per cent in the past year reflecting Ireland’s rapidly ageing population, the chief executive of the Alone charity has said.

Speaking at the launch of the charity’s Christmas campaign, Alone’s Sean Moynihan called for older people to get in touch while urging members of the public to support Ireland’s elderly people by donating their time and volunteering.

“As an organisation we’re starting to feel the demographic change in Ireland. People are living longer but the negative outcome of this is that for some people their life doesn’t turn out quite as they expected and they end up isolated and lonely with financial and housing issues. In the past 3-4 years our numbers have gone up 400 fold and the number of people coming to us is up 40 per cent in the last year.”

More than a quarter of people over 65 live alone in private housing while one in ten people suffer from chronic loneliness which can lead to depression; a predictor for “dementia, cardiovascular disease and decreased immune system responsivity”, said Mr Moynihan.

Broadcaster Vincent Browne, who attended the Alone launch, urged the public to get involved with the campaign and show support for the increasing numbers of older Irish people experiencing isolation. Browne said he was shocked to discover through the charity that 50,000 elderly people across Ireland rarely received visits from friends or family.

“The need for supportive housing, befriending and other services for older people has grown exponentially in recent years and, with the number of over 65s, is set to increase dramatically in the next couple of decades. It’s only going to get worse if we don’t act fast.”

Don Smith recently called the charity and was put in contact with a young volunteer who now visits his home once a week. Mr Smith, who worked for decades as an arts and dance correspondent for Irish and Scottish publications, says he is very impressed by the charity and their support for people living alone.

“I have one son who lives in London and we Skype and speak on the phone but it’s not the same as seeing someone on a regular basis for conversations which interest you. Christmas is a time when families are closer and living alone you become more aware that there is no family nearby.”

Alone’s Christmas activities for older people across Ireland will include a dinner dance, the delivery of hundreds of Christmas hampers and a special Christmas day dinner for a number of older people.

“We want older people to know that they have a right to be supported, to receive the support they need and to live in a place of their choosing,” said Mr Moynihan. “We will all be old one day and deserve to have supports and services in place to help us age well at home.”

Annette Egan has lived in the Ranelagh suburb of south Dublin her entire life. She spent the first six years living with her parents in a basement apartment on the Ranelagh road before they moved a around the corner to a house near Rathmines.

More than six decades later she is still living in the same home. Even though she knows the local streets by heart, a few years ago Ms Egan lost the confidence to go out by herself.

“I was becoming despondent and had lost all interest in leaving the house. I was afraid the only thing I had ahead of me was an old folk’s home. I knew I was just going to curl up so I rang Alone. I hadn’t been out anywhere in about two and half years and had nothing to lose but call them.”

Within three months of contacting the support organisation, Ms Egan said her life had transformed. “I was a new person and all my friends noticed the difference in me. You couldn’t keep me inside now if you tried. It’s amazing and I can’t even believe it had such an effect on me.”

Ms Egan now meets a volunteer once a week who joins her on a walk around the local area. “Normally we go down to Rathmines and we have a very pleasant walk. We go into the Swan centre and if there’s any bargains I might buy something. If not we just come out and go into a little cafe on Rathmines road called Isabella’s and have coffee. Then we ramble back down and she leaves me home.

“Valentina is her name and she’s Italian. We get on terribly well. You know by people if they’re enjoying themselves and I could honestly say she’s getting as much out of it as I am. I’m delighted to see young people sparing time to do something that some people might think is a bit depressing, talking to old age pensioners.”

Ms Egan is looking forward to attending the Alone Christmas dinner dance next month with Valentina. “I would advise any person that’s an old age pensioner of any age, if they feel they want to have a volunteer or be invited out to places, just lift the phone and talk to someone. I can now get out and walk wherever I want to go. I’m a new person.”