Addiction, not debt, the scourge on streets of Belfast

With five homeless deaths in city this year already, charities are urging Stormont to act 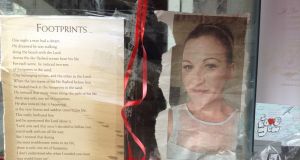 Catherine Kenny, a 32-year-old mother of one, became the fifth homeless person to die on Belfast’s streets since January 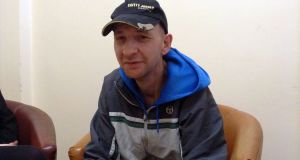 Emmett Donnelly (41) from Turf Lodge in west Belfast. “My biggest regret in life is definitely drinking. Sometimes I wake up in the morning and feel like a 90-year-old.”

Catherine Kenny’s life ended in the doorway of an empty shop last month in Belfast on Donegall Place just metres from the city’s majestic City Hall.

The 32-year-old, originally from Co Down, became the fifth homeless person to die on the city’s streets since January. Soon, handwritten tributes were left where she had died, expressing love and affection for “Our wee Cathy”.

Later, she was brought home to Downpatrick for burial. Hundreds gathered to remember the mother of one – described as “a beautiful person”, who had died weeks after a close friend, William ‘Jimmy’ Coulter, died in similarly tragic circumstances.

Her death has reopened debate about homelessness in Belfast. The numbers who sleep rough each night is unclear. Some say it is as few as six. Others put it at 19.

Hope Outreach for the Homeless, one of the volunteer groups formed over the last couple of years, began meeting Kenny 11 months ago, offering hot food, sleeping bags and “the most important thing, our time”.

Donna and Jim Connor from the Shankill in north Belfast started the group a year ago because loved ones had been hit by homelessness, so the issue is “close to our hearts”, they say.

Calling on Stormont to do more to tackle addiction and mental health problems, Donna Connor says: “Catherine was willing to go into rehab on the Wednesday and passed away on the Saturday.”

“We had got to know her and worked closely with her and her sister. We treated her as member of our extended family. We laughed and cried with her and she is going be greatly missed.”

Depaul Ireland, a homeless charity, began working in Belfast a decade ago when it was asked by the NI Housing Executive to come up with “a rough sleepers’ strategy” to cope with the 30 people who were to be seen drinking on the street, living in the open.

Soon, it opened the Stella Maris “wet hostel” on Garmoyle Street. Designed for people with the most serious of drinking problems, it has been full almost every night since. In the decade since, it has helped 204 people.

‘End of the road

Housing, not hostels is the answer, she argues. Two years ago, Depaul set up Housing First. Since then, it has moved more than 50 people with active addictions and complex needs into permanent accommodation, with “wraparound supports in place”.

Emmett Donnelly (41) from Turf Lodge in west Belfast is one of those living in Stella Maris. He ended up living in a tent on a patch of grass near Divis Street with his brother after he was burned out of his flat.

Three years ago, his brother died. Later, the former diesel mechanic moved into Stella Maris. “My brother and most of my friends from the crew in the tent are dead. I used to be drinking about two bottles of vodka a day, says Donnelly.

“You wake up and know you need another drink because you’re shaking like a leaf and you’re cold. When you’re drinking vodka you don’t feel the cold and then you wake up and you’re soaking with pish [urine]. That’s the lowest I felt.”

Sipping beer from a plastic cup at 11.30am, Donnelly holds few illusions about where his life has taken him. “My biggest regret in life is definitely drinking. Sometimes I wake up in the morning and feel like a 90-year-old.”

He still drinks every day, but the quantity and the strength of what he drinks has decreased sharply with the help of Depaul’s care: “Without this place [Stella Maris] I wouldn’t last, I would be dead,” he declares.

Donnelly loves watching TV, “going into a world of my own”, as he puts it, and spending time with his family, in particular, his 18-year-old daughter. “This year I want to keep my head down and get my own wee flat in near my family.”

These deaths mean a spotlight must be kept on the crisis, Anthony believes. “With the five deaths there has been a real need to stop and ask ourselves why has this happened just now? There has been a change recently.”

The needs of those on the streets have become more complex, particularly because of the greater availability of so-called legal highs. Equally, she says, the public is confused about the difference between begging and homelessness.

Figures from the Police Service of Northern Ireland released to The Irish Times suggest that of the 130 people arrested in the city in recent times for begging, 30 of them did not have a permanent address.

“With the very best of intentions they are providing food, sleeping bags and tea and coffee, so there is a question of is it co-ordinated enough or are we perhaps facilitating people to stay on the streets rather than to come indoors to services?

Rough sleeping is a bigger problem in Dublin, says Anthony. There the housing crisis has led to a homelessness crisis: “It has gone off the scale. There are still 100-plus people on the streets there each night.

“It’s a very different picture in Belfast,” she says, though she does not support calls to open up empty buildings. “They end up becoming a feature of the landscape and they are not normally ideal, usually opening from 9pm to 9am.” Complex needs require complex solutions, she argues.

Recently, Anthony gave evidence to Stormont politicians, where she tried to keep “hammering home” the message that affordable, social housing is vital and that NI’s addiction and mental health services urgently need attention.

Noting differences between Dublin and Belfast, Anthony points out that homeless services in Dublin are largely jointly funded by Dublin City Council and the Health Service Executive. In NI, the work is done by the Department of Social Development through the Housing Executive.

However, welfare reform across the UK poses a looming threat. “We must make sure people aren’t falling into a situation of rent arrears and mortgage default and becoming homeless,” she says. Homelessness is not something that affects just the addicted.

Homelessness “hacks decades off” the lives of people, says Simon Community chief executive Jim Dennison: “The average for a man is [that they will die in their] mid-40s and slightly less for a woman.”

“If we focus all of our attention on rough sleeping, we are going to miss a far bigger, wider problem, which is the people you don’t see,” Dennison says, “There are individuals perhaps on the cusp of homelessness, who are worried about paying their mortgage.”